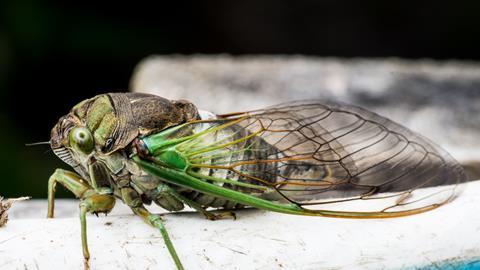 Meticulously organised fatty acids are responsible for the bacteria-killing, superhydrophobic nanostructures on cicada wings. The team behind the discovery hopes that its work will inspire antimicrobial surfaces that mimic cicada wings for use in settings such as hospitals.

When in contact with dust, pollen and – importantly – water, the cicadas’ superhydrophobic wings repel matter to self-clean. These extraordinary properties are down to fatty acid nanopillars, periodically spaced and of nearly uniform height, that cover the wings.

Past work has generally only described cicadas’ wings as ‘waxy’ and not explained how these fatty acids nanopillars give rise to unique traits. Nor is it known exactly why cicada wings evolved antibacterial nanostructures. These gaps in our knowledge exist, in part, because of how diverse the cicada family is. But Marianne Alleyne’s group at the University of Illinois, Urbana–Champaign, along with colleagues at Sandia National Labs, set out to understand what role chemistry plays in the wings of two evolutionarily divergent species. 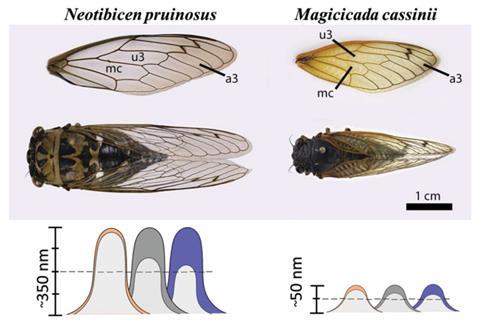 The cicada species studied and the nanopillar size and configuration according to how rapidly the material was chemically extracted (orange: 1 min; dark gray: 5 min; blue: 20 min)

Alleyne’s team performed wettability, fouling and antibacterial experiments, as they removed constituents from the cicadas’ wings. They found the most hydrophobic components appeared high in the nanopillars – near the wing’s surface – while the hydrophilic molecules were buried deeper. As they extracted chemicals, the researchers observed significant deformation of the nanopillars – but only in the wings of one species. The once tall nanopillars of N. pruinosus shrank and began collapsing into one another, whereas M. cassinii cicada wing nanostructures held their shape. For both species, antibacterial properties declined more than hydrophobicity. 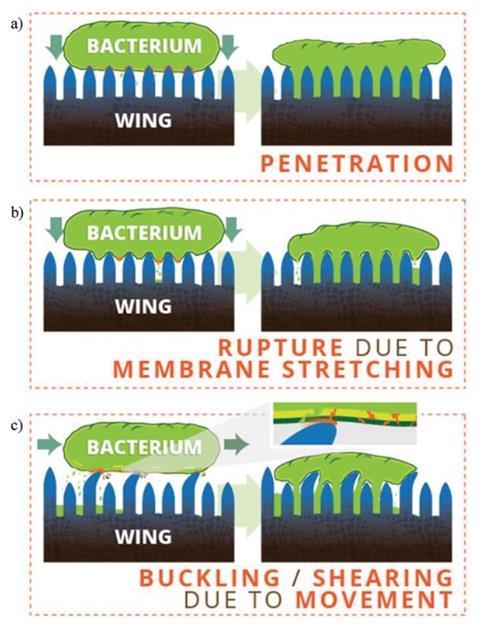 Those differences highlighted the role of chemical make-up, as opposed to structure. Previously, engineers designing synthetic nanostructures have assumed that the size and shape dicatated macroscopic properties single-handedly. But this work challenges that. The researchers prove that M. cassinii and N. pruinosus rely heavily on specific wing chemicals for antibacterial and other properties. And they point out that both species’ wings contain palmitic and stearic acids which are antibacterial themselves.

Alleyne believes this sort of work can change how we design materials, such as antimicrobial surfaces, both by learning from nature and improving on it. ‘So nature can make certain hydrocarbons,’ Alleyne says. ‘There’s limits to it. But we can go bigger, we can go smaller, we can put bends in that nature can’t.’

Geertje Van Keulen, an associate professor in biochemistry at Swansea University who was not involved with the study, found the approach intriguing. Van Keulen wonders whether the antibacterial findings ‘can be applied to hospitals, where you have a higher load of microbes’. She suggests that mass spectrometry imaging might also reveal other important molecules in the wings.

Due to the pandemic, the lab’s work is currently on hold. But Alleyne hopes to fabricate these surfaces in her lab with a keen eye on the actual biology. ‘It’s a way of doing bio-inspired design that is truly bio-inspired design.’