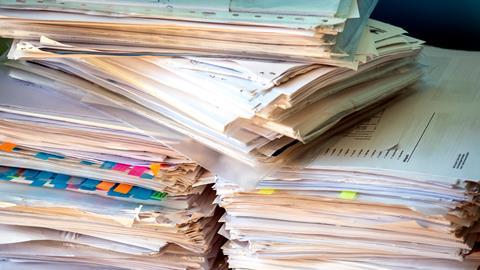 Cutting the red tape involved in UK research is going to require cultural change and new principles, according to Adam Tickell, vice-chancellor of the University of Birmingham, who is leading a review into research bureaucracy. However, detailed recommendations won’t come out until later this year when the review reports in full.

Tickell’s interim report reflects evidence from over 250 sources including funders, policymakers, institutional leaders, individual researchers and research teams. It finds that ‘applying for funding’ is considered to be the main source of unnecessary bureaucracy, closely followed by ‘institutional bureaucracy’, and ‘reporting and monitoring’. Generally, the report finds a ‘clear perception’ that the bureaucratic burden has increased over time. This is partly because, as priorities change, new requirements get added, but very few are removed.

The review will now consider six areas for detailed analysis: assurance, reporting and monitoring; the application process; grant implementation and in-grant management; improving digital platforms; communications; and institutional bureaucracy. The team has come up with some provisional ideas that they plan to test out during the second half of the review period.

The report notes that the vast majority of grant applications are unsuccessful – in 2020–21 UKRI’s overall success rate was 21%. So how could the application process be simplified? One approach that the review will investigate is to make more use of two-stage applications, which could weed out unsuitable entries early on by asking peer reviewers to assess a brief expression of interest before seeking a full application.

Tickell intends the final report to identify specific examples where bureaucracy can be reduced and identify ways to ensure bureaucracy does not increase in the future. Inevitably, it will also point to broader systemic issues, which he recognises will require changes in the way people work. ‘Making lasting change will require action not just from funders but also researchers, institutions and government,’ he noted.

‘There’s much to welcome in Adam Tickell’s interim report,’ says James Wilsdon, digital science professor of research policy at the University of Sheffield. ‘But the real test will be in any concrete measures that are proposed in his final report. The interim report has given us a tasty amuse-bouche, but the main course is yet to come, and it’s this that will determine what difference, if any, the Tickell review will make. I hope he doesn’t shy away from making some firm recommendations, and in highlighting where the real problems lie. For example, I think many would see government policy itself as a big source of unnecessary bureaucracy – with regular reorganisation of the funding system, setting up of new bodies, and shifting priorities – generating large volumes of extra work.’

Kieron Flanagan, professor of science and technology policy at the University of Manchester, also says the report is ‘helpful’ in disentangling some of the issues surrounding complaints about bureaucracy. However, he notes that Tickell, as a vice-chancellor, is ‘perhaps a bit conflicted’. ‘It is clear that “institutional bureaucracy” is a major concern, but this is the area where the report is most coy. Yet universities are very risk-averse organisations and their natural response to anything is to put a new process in place.’ He adds that the tendency, albeit largely implicit, doesn’t acknowledge that each time this happens it is as a result of an active choice by institutional leaders like Tickell.