Researchers in Japan have created a novel superhydrophobic hybrid surface that can separate water droplets sliding down it based on nothing more than their size. This surface, with its ‘invisible gates’, could be used to separate droplets for analytical tests or even find applications in micro-electromechanical devices.

The manipulation of microdroplets is commonplace in nature. Beetles and other insects use hydrophobic and hydrophilic surfaces, arranged in specific patterns, to control the movement of water on their shells. Insects like the Namib Desert beetle use this technique to ‘harvest’ moisture from the air to drink. And lotus leaves have highly hydrophobic surface that helps to keep them clean.

Daisuke Ishii, at Tohoku University, Sendai, and Masatsugu Shimomura, at the Japan Science and Technology Agency, Kawaguchi, created a material that was inspired by these natural hydrophobic surfaces. They started by manufacturing a polystyrene-based self-organised honeycomb-patterned film. They then used electroless plating to form nickel domes on the honeycomb, varying the number of domes using self-organisation techniques. Regions rich in domes were superhydrophobic, while those with fewer domes were ‘sticky’, creating invisible gates. These invisible gates stopped a water droplet of a certain size in the same place every time as it rolled down the surface. 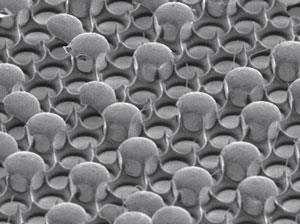 ‘The idea of using nanostructured surfaces coupled with hydrophobic coatings to make surfaces superhydrophobic is well known and of importance for a range of applications including self-cleaning buildings and fabrics, as well as water repellent coatings,’ says Karen Wilson, a physical chemist at the University of Cardiff, UK. ‘Most studies focus on getting droplets to roll off the surface giving a “self-cleaning” effect rather than to try and pin them depending on size.’ She adds that the surface could find uses in electronics, analytical or separation science or even sensing applications.

Ishii says that they now plan to take this work further. ‘Droplet manipulation is necessary for the design of microfluidic devices and we are hoping to develop various novel technologies to enable us to produce novel fluidic devices. We are also considering the possibilities with other micro-electromechanical systems research groups in Japan.’