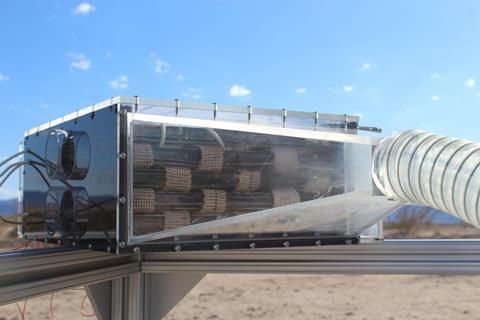 The latest version of University of California, Berkeley’s water harvester blows ambient air over a cartridge filled with a MOF, which is visible inside the plexiglass box. The MOF pulls water from arid air, which is then removed using mild heating. The concentrated water vapour is blown out through the tube at right to a condenser. This process produces water for drinking using only solar panels and a battery, even in areas as dry as the Mojave Desert

Metal–organic frameworks (MOFs) harvest water in arid conditions like no other material. However, their water harvesting abilities have been limited to one cycle per day. Now, a team led by Omar Yaghi at the University of California Berkeley, US, has designed and synthesised a new aluminium-based MOF that overcomes these hurdles, and could collect as much as 10 times more water than other MOFs and perform up to 150 cycles per day.

To test their MOF device, researchers travelled to the Mojave Desert in Southern California, the driest desert in North America. ‘We wanted to test the performance of our new MOF water harvester under very extreme climatic conditions,’ explains Yaghi. The device operated continuously for three days, harvesting a total of 2.1 litres in a hyper arid area where relative humidity sometimes goes as low as 10%. ‘The results were certainly impressive,’ Yaghi says.

‘Two-thirds of the global population live under conditions of severe water scarcity, and global warming is only making it worse,’ explains David Fairén-Jiménez, an expert in adsorbent porous materials from the University of Cambridge, UK. ‘Water harvesting is a great opportunity for MOFs, since traditional adsorbent materials don’t perform as well: silica gel can only adsorb water … when the humidity is high, [and] zeolites … show too strong interactions, [making] regeneration very costly in terms of energy,’ he says. 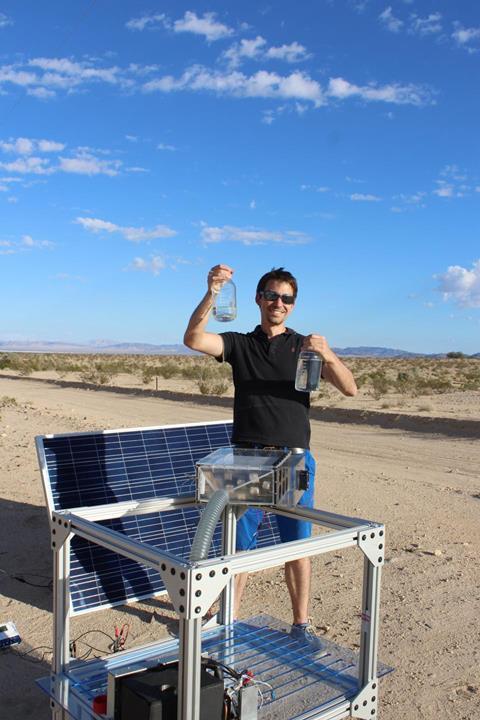 University of California, Berkeley postdoctoral fellow Mathieu Prévot shows off water collected by the harvester in the Mojave Desert

The new MOF is also environmentally friendly. Author Nikita Hanikel explains that ‘previous generations used zirconium, which is 600 times scarcer than aluminium, and involved syntheses with organic solvents’. ‘Our materials harvest drinking water, so we decided to develop a greener, sustainable synthesis that uses a straightforward one-pot route with water as the only solvent,’ he adds.

Engineering a new design was key to get in many more adsorption–desorption cycles per day. ‘Instead of a thick MOF bed, we created a MOF cartridge consisting of several trays supporting thin layers of MOF, allowing a better exposure to air,’ explains Yaghi. This accelerates both water uptake and release, and eventually ‘led us to perform several cycles per day’, he adds. Hanikel is optimistic that they could take it even further. ‘Theoretically, implementing more MOF beds and an automated process, we could go up to 100 cycles per day.’

Furthermore, researchers carried out a careful analysis of the water adsorption kinetics in search of ‘thirstier’ MOFs. ‘Further advances could soon arise with the help of computer simulations,’ Fairén-Jiménez says. ‘Algorithms predict how new materials will perform, accelerating the whole research process and minimising the cost towards a final application.’

‘Scaling-up the production of these materials should be possible – they use a simple organic molecule and one of the cheapest metals,’ says Fairén-Jiménez. Yaghi’s team has already created a start-up – Water Harvesting – that will mass-produce the new MOF and sell water-harvesting devices. The prototype ‘is the size of a microwave oven and should deliver seven to 10 litres of water per day’, says Yaghi. ‘We will unveil it this autumn.’