UV-triggered trans-cis isomerisation of a diazo group turns microbe-killer on, before reverse process that would avoid environmental build-up

Dutch chemists have made a new weapon to fight bacteria: an antibiotic whose microbe-killing activity they can turn on using ultraviolet light, before it slowly diminishes. Ben Feringa’s University of Groningen team hope this will avoid drug resistance problems caused by existing antibiotics that are excreted unmetabolised and therefore collect in the environment. Though Feringa emphasises their results only constitute a first proof of principle, they could allow antibiotics that are only made active shortly before they’re taken. ‘Alternatively one could activate the antibacterial agent at the infection spot with the advantage that at other parts of the organism – for instance in your gut – normal bacteria are not affected,’ he tells Chemistry World.

Feringa’s team has long worked on photochemical reactions that drive structural, perhaps most famously in molecular motors. With antibiotic resistance labelled ‘a ticking time bomb’ their approach presents a possible solution, through switching from a drug isomer that doesn’t kill bacteria to one that does. Slow reconversion to the inactive isomer could then prevent the active form lingering and allowing bacteria to adapt and gain resistance to it. So Feringa’s PhD student Wim Velema redesigned existing clinically-used quinolone antibiotics to introduce this capability by swapping the piperazine group attached to quinolone drugs’ bicyclic core structure for various photoresponsive aryldiazo groups. 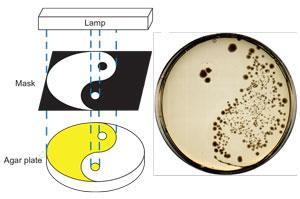 E. coli grown on an agar plate containing UV-activated antibiotic shows the pattern from a template held between it and the lamp

When exposed to ultraviolet light, the diazo group switches from the trans to the cis isomer, which then thermally isomerises back into the trans form over time. The Groningen scientists tested nine compounds in Escherichia coli broths for their antibiotic activity in each form, hunting the best combination of potent cis, and innocuous trans isomers. They found a quinolone with a diazo-4-methoxy-3-methyl benzene substituent showed the greatest activity difference, and its cis form had a half-life of two hours.

Stuart Conway, who investigates biological photochemistry at the University of Oxford, calls these experiments ‘beautiful proof-of-concept studies’. ‘Antibiotic resistance is a huge global problem that isn’t going to go away,’ he says. ‘Any novel method to combat resistance is important. This is a very nice idea to help tackle the problem.’

Feringa stresses that the idea requires further development before it could be used practically. He wants to optimise the compounds’ activity profiles further, and achieve isomerisation in visible or infra-red light, which is less harmful and can penetrate further through skin.  However, he’s pleased with how well the idea has worked already. ‘New approaches are needed and we would be happy if this could serve as a stepping stone and stimulate others to find better original solutions,’ Feringa says.