Demon can transfer energy from cold to hot reservoir if it simultaneously generates information, researchers claim 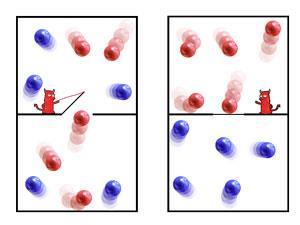 Maxwell’s demon is a famous thought experiment designed to show how, in an isolated system, disorder or ‘entropy’ can decrease in apparent violation of the second law of thermodynamics. Now researchers in the US have put a new twist on the idea, claiming to show theoretically how the second law can remain intact if the demon is allowed to scribble down random information.

In the original thought experiment, proposed by the UK physicist James Clerk Maxwell in 1867, a demon sits between two isolated chambers. By carefully timing the opening of a hatch between the chambers, the demon can let only slower, ‘cold’ particles through to one side, and only faster, ‘hot’ particles through to the other. Without expending energy then, the demon makes the system more ordered, lowering entropy and apparently violating the second law.

The general response to Maxwell’s proposal is that the second law is not violated because the demon himself would generate more entropy than the system loses through his meddling, although quite how is uncertain. Some physicists have proposed that the demon would avoid breaking the second law if he were allowed to simultaneously write down random information while he operates the trap. This is because random information can be considered a form of entropy – technically Shannon entropy, after the US mathematician Claude Shannon who first described it.

The latest theoretical proposal, which has been put forward by Christopher Jarzynski and others at the University of Maryland in College Park, US, shows how this thermodynamic-to-information entropy exchange might occur in an autonomous system, without the input of any external work. In the researchers’ model, the demon is a ‘dumb’ device that simply stamps a random bit onto a memory register every time a packet of energy is transferred from the cold to the hot chamber. Jarzynski believes this model shows how Shannon entropy, related to random information, can be equated to thermodynamic entropy. ‘The [information] randomness really can be used to balance the lowering thermodynamic entropy,’ he says.

Philosopher Owen Maroney at the University of Oxford, UK, calls the work an ‘encouraging development’ because, at least theoretically, it rules out concerns that the demon transferring thermodynamic entropy to information entropy would come with additional costs. ‘To be really convincing, we'd have to build a real system,’ he says.

Physicist Mark Raizen at the University of Texas at Austin, US, is unsure whether an experimental demonstration is likely, but believes the theory is useful in any case. ‘In recent years, advances in theory and experiment have taken [Maxwell’s] thought experiment to another level, removing the spookiness, and bringing it to reality,’ he says. ‘The current paper continues that trend … Whether the precise model can be realised in experiment is not yet clear, but our understanding of Maxwell's demon is better thanks to this paper.’