Odd 'entropic bonds' akin to chemical ones can form between nanoparticles 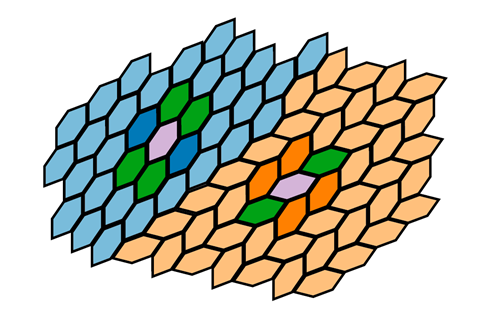 Entropy maximisation can lead to ‘entropic bonding’ that is remarkably similar to traditional chemical bonding between molecules, researchers in the US propose, even when effectively no electronic interaction occurs. The phenomenon could be useful in controlling self-assembly of colloids and other structures in soft matter.

The second law of thermodynamics famously states that, in any allowed process, the entropy of a system always increases. Entropy is sometimes defined broadly as the degree of disorder or randomness in a system, and the second law explains why a highly pressurised flask of gas will spontaneously spread out to fill a vacuum but all the molecules in a room will never spontaneously concentrate into a flask, leaving vacuum everywhere else. However, the second law often springs surprises: maximising entropy, which is more precisely the number of microscopic states of a system corresponding to each macroscopic state, can drive molecules to self-assemble from a seemingly disordered liquid into an ordered crystal, for example. ‘The particles can assemble themselves in more different ways if they become a crystal than if they remain a liquid,’ explains computational scientist Sharon Glotzer of the University of Michigan, Ann Arbor.

Under suitable conditions, colloidal nanoparticles can be arranged such that direct intermolecular forces arising from electronic interactions are almost entirely screened. The molecules therefore behave like hard spheres and, in the absence of other forces, are governed purely by entropy. The definitive experiment to establish this required extreme measures to avoid the influence of gravity. ‘They flew the experiment on the International Space Station,’ explains Glotzer. ‘The astronauts produced all kinds of gorgeous crystals in test tubes.’

The microscopic details of entropy’s influence on systems remain poorly understood, however. ‘When we work with experimentalists and they grow nanoparticles in solution, they get whatever shape they get, and then they try to functionalise them with DNA or organic ligands, for example, to engineer the explicit interactions that arise from electrons,’ says Glotzer. ‘Nobody ever says “How do I engineer the entropy of my system?”’

In their new research, Glotzer and colleagues conducted a series of computational simulations focusing on hexagonal lanthanide-fluoride nanoplates. These can be synthesised with a wide range of bond angles and, in experiments, are often functionalised with multiple different groups. The researchers, however, focused on nanoplates with no functional groups and therefore negligible electronic interactions.’ When you strip all those interactions away, what you are left with is just entropy,’ explains Glotzer.

The researchers found that, despite the absence of physical attractive forces between the molecules, crystal structures formed that were remarkably similar to those seen under the influence of traditional chemical bonding. ‘In principle, we all knew that maximisation of entropy in the absence of any other forces could order things,’ explains Glotzer, ‘What we didn’t know is that these emergent statistical, entropic forces could be highly directional and predictable. That predictable directionality is what has led us to argue that these emergent forces are, to all intents and purposes, bonds.’

Theoretical chemist Daan Frenkel at the University of Cambridge says the Glotzer lab hugely expanded his own work on entropic self-assembly in the 1980s and 1990s. ‘She has shown that purely entropic effects can produce a huge variety of crystal structures, liquid crystal structures and quasicrystal structures. That, I think, was a surprise to everybody.’ He says the present paper ‘is not terribly surprising for people familiar with entropic self-assembly but attempts an intuitive theoretical rationalisation of what they have found in the past that gives general rules of thumb to predict which structures will be formed and which will not’.

The researchers now aim to develop a predictive, microscopic theory of entropic bonding that can be combined with traditional theories of chemical bonding to assist in molecular design. ‘We want to understand the role of entropy and shape alone in a system that also has chemical interactions,’ says Glotzer.