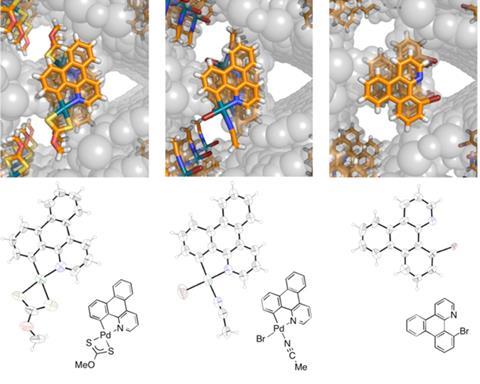 The Japanese chemists behind a controversial x-ray crystallography method have used it to study a poorly-understood reaction mechanism for the first time.1Makoto Fujita’s University of Tokyo group watched palladium-mediated aromatic bromination proceed after trapping reactants within a metal–organic framework (MOF). And thanks to a five-year, £9 million grant they’re also set to help the method spread rapidly in their home country. ‘In a few decades, we envision changing the game in organic [and] medicinal chemistry research, with just microgram quantities of crystal,’ Fujita enthuses.

Last year, Fujita’s flasks set the chemistry community buzzing. His group had found a way to perform x-ray diffraction on compounds that don’t ordinarily crystallise. Chemists rushed to try it, including University of California, San Diego, crystallographer Curtis Moore’s colleagues. But they failed, and Moore dug deeper. Following his questions, their own independent investigations and efforts by other groups Fujita’s team acknowledged that they couldn’t unambiguously make a stereochemical determination they said they had.

‘Some of his crystallographic data that I have seen – and I am sure his crystallographers are to blame – is rather questionable, with some molecules being “constructed”,’ Moore says. ‘I went looking into his Nature article because so many people were bringing it up to us wanting to do the same. We even had a few researchers attempt to use Fujita’s flasks, with no luck.’

Delving into the detail

In January Fujita’s team published a more detailed method2, which Massachusetts Institute of Technology’s Ekaterina Vinogradova and her colleagues rapidly exploited to determine a hypervalent iodine trifluoromethylthiolation reagent’s structure.3 ‘Your compound must substitute solvent which is trapped initially in the MOF’s pores,’ she explains. ‘From my experience very concentrated solutions or pure analytes are preferred otherwise it’s very hard to introduce enough to properly analyse by x-ray crystallography.’

Fujita’s team’s latest study saw PhD student Koki Ikemoto make MOFs from tris(4-pyridyl)triazine ligands connected by zinc iodide that can accommodate aromatic ‘cartridges’ carrying the palladium catalyst. First, he carefully layered cartridge and MOF component solutions dissolved in nitrobenzene and methanol. Ikemoto then had to wash out residual nitrobenzene with acetonitrile – which Fujita notes would usually destroy a MOF not hosting the cartridge – and add N-bromosuccinimide in the same solvent to perform the bromination. After that, he took x-ray diffraction snapshots over a day.

The study brought two revelations. ‘We observed a short-lived, monomeric Pd(II) species that normally rapidly dimerises to form a precipitate and is unobservable,’ Fujita explains. ‘More importantly, the Pd(II) species underwent reductive elimination to form the aryl bromide. These observations could explain the reaction mechanism by a Pd(II)/Pd(0) catalytic cycle.’ While this contradicts the dominant theory, the Japanese chemists concede the MOF matrix might interfere. ‘We are therefore not willing to claim our observed pathway to be representative of the normal palladium-catalysed bromination,’ Fujita says.

Vinogradova says these findings show it’s possible to study reactive organometallic complexes with ‘crystal-free crystallography’. ‘Although it is hard to apply this method to elucidating mechanistic pathways of reactions under precise catalytically relevant conditions, this method nevertheless can provide important structural information relevant to potential reactive intermediates,’ she comments. However, her co-author Peter Müller warns that the order the approach typically produces isn’t up to normal crystallographic standards. ‘Only the highest level of diligence and integrity from the crystallographer is going to yield trustworthy results,’ he says.

Although Moore still has reservations about the crystalline flask method, he does say it’s important that Fujita’s team has revealed this bromination route. ‘One would think that if this works so well, the authors might have demonstrated several instances showing its usefulness,’ he adds.

Moore’s team could soon be set to provide this evidence in collaboration with their neighbours in Phil Baran’s group at the Scripps Research Institute – and Fujita. Baran anticipates that by mid-summer his group will be using the Fujita method regularly, after previously struggling with it. ‘We tried the method very early on, before Fujita’s Nature Protocols paper emerged, so that was not a fair test,’ he says. ‘In a recent collaboration with the Fujita group his technique worked on several low molecular weight compounds and was essential to us for assigning regiochemistry.’ He calls the bromination study ‘truly fascinating work’. ‘That you could study a mechanism this way would have been regarded as science fiction just a few years ago.’