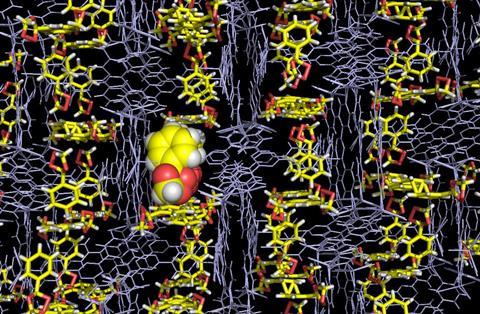 The researchers behind the crystalline sponge technique to investigate molecules’ structures have found a new use for it – analysing the structure of highly unstable compounds. The Japanese team has demonstrated the application on highly explosive ozonides, whose structure was determined in a safe and controlled way.

The crystalline sponge method was met with much excitement when it was unveiled as it can be used to elucidate the structure of compounds that do not easily form crystals. A porous crystalline structure, made up of a metal–organic framework, is mixed with a target compound, which is absorbed into its pores. Thanks to the ordered structure of the sponge the target compound will orient itself in a regular way within the lattice allowing its structure to be interrogated using x-ray crystallography.

An advantage of the technique is that it works on very small scales. ‘The crystalline sponge can be very, very small, roughly 100μm high,’ says Makoto Fujita, who developed the technique with colleagues at the University of Tokyo. ‘That means the required amount of compound can be very small. We can analyse the crystal structure of a target compound from a microgram quantity of the sample.’

With this idea in mind the team turned their attention to ozonides – an intermediate formed when alkenes or alkynes are converted to alcohols or aldehydes via ozonolysis. While ozonides are structurally interesting their highly explosive nature means that they are rarely isolated and crystal structures of the compounds are uncommon.

Fujita and his team used the crystalline sponge method to solve the crystal structures of several ozonide compounds. They were able to effectively eliminate any risk of explosion by adding only microgram quantities of the ozonides to the sponge. The team also found that they could distinguish between the cis and trans isomers of one of the ozonides they studied.

‘Normally with x-ray crystallography we cannot analyse the mixture of two compounds,’ comments Fujita. ‘In this case we were very lucky that two isomers were absorbed at the same time, and then trapped at different binding sites.’

Timothy Ramadhar, a postdoc at Harvard Medical School in the US, who was not involved in the research, says: ‘The development of more sponges in the future will expand the scope of chemically unstable intermediates and hazardous compounds that can be studied.’ However he sounds a note of caution on the technicalities of carrying out such a tricky method, in order to ensure crystallographic data and models are reliable.

The team now plans to test the technique with other unstable or dangerous compounds. ‘In other chemical reactions there are so many proposed intermediate structures that are too unstable to be observed. We would like to generate such very unstable intermediates and directly observe them via our crystalline sponge method,’ says Fujita.