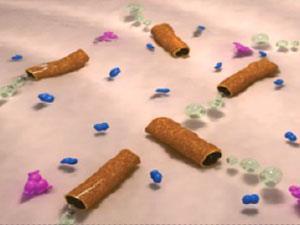 Researchers in Germany have invented micromotors that can propel themselves through water while degrading organic pollutants. The micromotors, which run on dilute hydrogen peroxide, could be used to clean up small reservoirs, pipes and other hard to reach places.

Organic pollutants are found in many industrial wastewaters, including those of textile companies, pharmaceutical companies and agriculture. They are an increasing problem, because they are often resistant to environmental degradation and cannot be processed with conventional biological or chemical water treatments.

Micromotors could help. Last year, building on previous uses of micromotors as on-chip biosensors and cell transporters, Joseph Wang, at the University of California, San Diego in the US, and colleagues developed self-propelled micromotors that could capture oil droplets – thereby offering a means to clean up small oil spills. Only now, however, have micromotors been used to actually degrade pollutants. ‘This study indicates the great potential of micromotors for environmental monitoring and remediation,’ says Wang.

Developed by Samuel Sanchez and colleagues at the Max Planck Institute for Intelligent Systems and at the Leibniz Institute for Solid State and Materials Research the latest micromotors consist of a tubular core of platinum that is surrounded by iron. Releasing them into polluted water containing dilute hydrogen peroxide results in the motors’ platinum cores converting the peroxide into oxygen bubbles and the surrounding iron produces hydroxyl radicals. The bubbles propel the micromotors along, while the hydroxyl radicals oxidise organic pollutants.

Two experts in micromotors, Ayusman Sen at Penn State University in the US and Martin Pumera at Nanyang Technological University in Singapore, both say that the big advantage of the micromotors is their self-propulsion, which speeds up reaction rates and, therefore, quickly degrades pollutants. ‘The [hydroxyl radicals] can reach the target pollutant molecules much faster than would be possible by simple diffusion,’ says Pumera.

The micromotors would probably not be able to remediate ‘huge amounts’ of waste water, says Sanchez. ‘We aim to clean contaminated capillaries, small pipes and places difficult to reach,’ he adds. ‘We are dealing with applications especially for the microscale and environments hard to get to.’

Li Zhang at the Chinese University of Hong Kong says the results are ‘striking’, and hold promise for environmental applications. ‘To date, though several research groups have been working on micromotors, they have mainly put great efforts on biological and biomedical applications,’ he says. ‘It is apparent that for industrial application, such as wastewater treatment, this process needs to be further scaled-up and the micromotors require multi-functionality. I think it is worth doing those trials and continuing this research topic.’