Researchers from the US and Japan have devised a new type of molecular motor capable of propelling itself across a liquid surface. The move marks another step along the road towards mimicking motile life forms found in nature, such as bacteria, in the quest for autonomous microscopic machines.

The team, led by Hiroshi Matsui of Hunter College, City University of New York, loaded the pores of a metal-organic framework (MOF) with the peptide diphenylalanine and floated the particles on water. When they introduced sodium ethylenediaminetetraacetate (EDTA) to the water this partially degraded the MOF, causing the peptide to leak out. Upon reaching the water, the peptide spontaneously reassembles into a hydrophobic aggregate, reducing the surface tension at that point. The creation of a surface-tension gradient forces the particles to move towards the area with higher surface tension, a phenomenon known as the Marangoni effect. 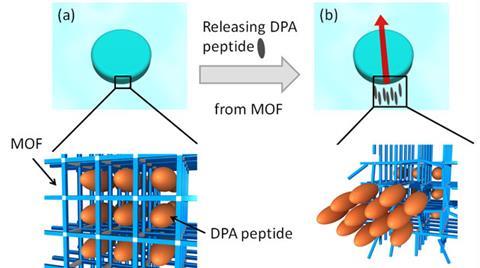 As the peptide is released it forms a hydrophobic aggregate, propelling the boat using a surface tension gradient

‘Essentially the reassembled peptide forms a tail which pushes the particles along,’ says Matsui. The team fabricated a tiny plastic boat with a slit in one end and loaded it with a MOF-peptide fuel tank. Degradation of the MOF caused the peptide to flow out of the aperture on the boat, propelling the vessel forward.

Matsui says that an intriguing possibility would be to create a surface-tension gradient on a liquid surface not by leaking molecules out of a MOF, but by drawing them in. ‘If you had a target molecule on the surface that could be pulled into the cage of the MOF, this could create the gradient to provide propulsion. One could maybe envisage such a micro-robot as a method to clean up a pollutant, for example.’ The team is now working on such an approach.

Experts on molecular self-propulsion are impressed by the work. Robin Ras, of Aalto University in Finland, earlier this year demonstrated a Marangoni-propelled boat using ethanol vapour to reduce surface tension. ‘Of particular interest is that they use a biological fuel and that they designed a system in which the fuel can be released in a slow and controlled manner, leading to propulsion for an extended time,’ says Ras.

Orlin Velev of North Carolina State University in the US notes that there is growing interest in creating ‘active, responsive and smart structures.’ The new work is ‘important not because it has an immediate application, but in revealing new levels of complexity in the design and synthesis of active materials.’

Ray Kapral at the University of Toronto in Canada, comments, ‘One of the  challenges in this field is to find new fuels for the propulsion of motors and this paper suggests a novel fuel source. Reactions in the environment play an important role for biological motors and that the same is true for this synthetic motor.’