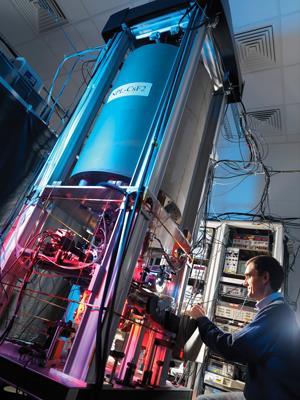 Ultra accurate atomic clocks may one day have molecular counterparts

You’ve heard of atomic clocks – so why not molecular clocks?  Although they would be harder to make and study, a new proposal for using molecules rather than atoms for ultra-precise measurement of frequencies could help to probe whether there are fundamental laws of physics beyond the ones we know already. 1

Stephan Schiller of the University of Düsseldorf in Germany and his colleagues aren’t suggesting that molecular clocks would be any better as timekeepers than the best current atomic clocks – although the calculations suggest that they could be at least as good. Rather, the motive for using molecules is that the frequencies being measured would be vibrational, depending on the masses of the nuclei, and would thus offer an extremely sensitive probe of the proton’s mass (more strictly, the proton-to-electron mass ratio). In contrast, single-atomic clocks use electronic transition frequencies, which depend mostly on the electron’s mass.

Schiller and colleagues are interested in examining whether the mass of the proton remains constant over time. Studies using caesium atomic clocks, which define the unit of time, have already placed rather stringent limits on the amount by which the proton mass might vary, but a molecular clock could probe that even more sensitively.

The researchers say that all the existing techniques and experience from atomic clocks, which trap one or two ions with an electric field, could be applied to measure trapped molecular ions. They suggest using the simplest known molecule, H2+, or the deuterated version HD+, which contains just a single electron and so can be described very accurately by quantum theory.

The limits on how precisely the vibrational frequencies can be measured are set partly by the perturbing effects of the trapping electric field, and the magnetic fields also present, on the electron energies. Temperature effects slightly shift the frequencies too. These depend on the size of the applied fields and the ambient temperature, and so can be determined only as accurately as one can measure those things. However, Schiller and colleagues show that by measuring carefully chosen combinations of two or more vibrational frequencies, the effects of these shifts can be almost cancelled out. They calculate that the resulting uncertainty for a ‘combination frequency’ of HD+ can be as low as 5x10-18.

Schiller explains that testing the constancy of the proton mass would involve making very accurate measurements of the H2+ or HD+ frequencies in separate experiments several years apart. If the proton mass were found to change, it would point to a profound gap in our understanding of fundamental physics. If that happened, ‘I’m sure theorists would rush to develop new theoretical models’, says Schiller.

‘To realize a molecular ion clock is very challenging,’ says Jean-Philippe Karr of the Université d’Evry-Val d’Essonne in France, who has also explored this idea.2 ‘This new idea of using composite frequencies is interesting, although it adds an extra layer of complexity to the experiment.’ Such an experiment could constrain the proton mass by two or three orders of magnitude better than the current best laboratory tests. ‘That would be a very important result.’ Karr adds that molecular clocks could also be used to probe violations of parity symmetry in physics (left–right equivalence) by making measurements on chiral molecules.