Mutant plant can mop up explosives 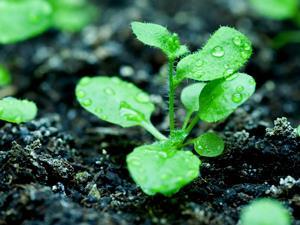 UK researchers have identified a mutant plant that is able to thrive on soil contaminated with high concentrations of the explosive TNT. The finding opens the way to cleaning up the vast swathes of land throughout the world – principally military firing ranges – polluted with the highly toxic and persistent compound. In addition the team has pinpointed the mechanism by which TNT exerts its toxicity in plants, and say this could lead to the development of new herbicides.

Neil Bruce and colleagues at the University of York screened thousands of Arabidopsis plants that had been mutated throughout their genome by conventional breeding methods. ‘We found a single mutant that survived and grew normally on TNT-contaminated soil,’ says Bruce.

Having anticipated that this mutant contained an enzyme capable of detoxifying TNT, the team was surprised to find that in fact the plant was deficient in a particular enzyme, called monodehydroascorbate reductase 6 (MDHAR6) which is involved in recycling vitamin C. This enzyme resides in mitochondria, specialised structures that generate the plant’s chemical energy.

The team stitched the gene for MDHAR6 into the bacterium E. coli, enabling the enzyme to be synthesised in large quantities for purification and subsequent assay against TNT. ‘We saw that the enzyme was reducing one of the nitro groups on TNT to produce a nitro radical, and that this in turn reacts with atmospheric oxygen to  produce reactive toxic oxygen species which are damaging to cellular structures,’ says Bruce. The result is that the mitochondria become crippled, which is fatal to the plant.

The deficiency of the enzyme does not harm the plant, because other forms of the enzyme exist elsewhere in the cell and these are able to carry out the vitamin C recycling role. 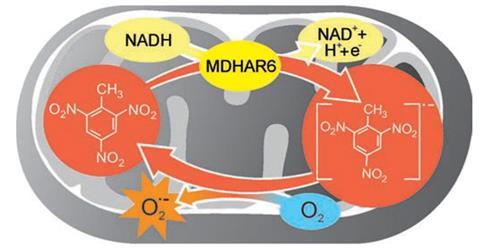 The finding suggests that plant strains that lack this enzyme could be used to mop up TNT on contaminated sites, absorbing it and trapping it within their root, effectively removing it from the environment – a concept known as phytoremediation. Furthermore, because MDHAR6 exists only in plant cells, it may be possible to design compounds analogous to TNT without its environmental toxicity to act as a herbicide.

Jerald Schnoor of the University of Iowa, US, says that the work is important. ‘Genetically modified plants, like GM switchgrass, could be used to clean up contaminated range sites,’ he notes. ‘There are millions of hectares of contaminated sites where there are remnant chemicals like TNT and RDX [another explosive] around the world.  The paper shows that the modified plants will degrade TNT at least as fast as normal plants do, without succumbing to the toxicity.’