Nanotubes and nanowires could be used in materials and devices by blowing them into films, a process so cheap it is used to make bin bags

Nanotubes and nanowires could be used in materials and devices by blowing them into bubble films, a process so cheap it is used to make bin bags.

Charles Lieber of Harvard University, US, and colleagues have found an efficient new way to add nanowires or nanotubes into polymer films. Unlike other techniques, which tend to give films of nanoparticle clumps, the resulting material has nanoparticles evenly aligned and distributed through the film.

’Nanocomposites are made currently by very exotic techniques like wet spinning,’ Alan Dalton, an expert in nanomaterials at the University of Surrey, UK, told Chemistry World. ’The main breakthrough here is that very large assemblies can be made, very easily and very cheaply,’ he said.

The team made the films by blowing bubbles of a polymer-nanoparticle suspension through a die. The bubble film could then be made into wafers, flexible sheets or curved surfaces. Lieber made sheets measured up to 225 mm by 300 mm, but says he believes the process could be adapted to make nanocomposites on a metre scale. 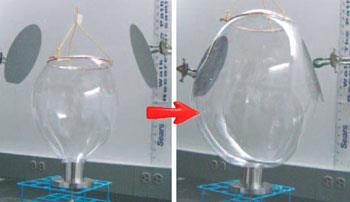 Nanoparticle suspensions can be blown into bubbles

The technique should work for all types of nanoparticles, said Dalton. The very regular alignment of nanotubes within the film would give it high tensile strength - potentially higher than Kevlar - and could be used in coatings such as aeroplane wings, he said, while the nanowire films could form sensor arrays, detecting gases or even biological warfare agents.

Discovering that the nanoparticles were so well aligned was a great feeling, Lieber told Chemistry World. ’We were all very excited because we realised this was a real breakthrough in the organisation of nanowires and nanotubes, something we’ve been working on for many years but always restricted to much smaller size scales,’ he said.

While the nanoparticles’ regular alignment and spacing improves the material’s properties, the team is still investigating the reason they line up so well. But understanding the fundamentals of the process should allow the film’s structure and properties to be controlled, said Lieber.

The team is now looking to develop the technique for practical applications. Large arrays of addressable nanowire devices for biological and chemical sensor arrays; using different polymers that can directly integrate into devices and circuits; and three-dimensional structures made by scrolling or folding the films, are all on the table.

Although Lieber’s composites currently incorporate less than 1 per cent nanoparticles, this could be increased. ’You need at least 4-5 per cent by weight to get a good mechanical structure, but this is quite achievable, for example using surfactants or alternative polymers. There should now be real advances made quickly by learning from other areas,’ Lieber concluded.