Enzyme activation results in altered proteins, bringing them to the attention of the immune system 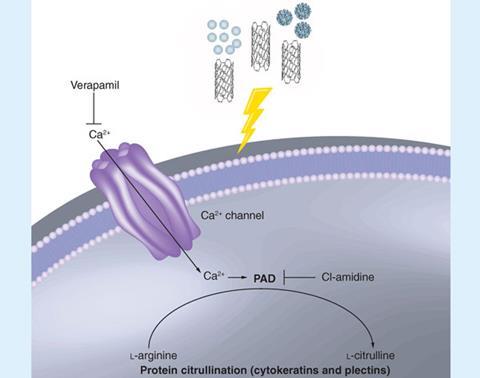 Breathing in nanoparticles could cause rheumatoid arthritis and other serious autoimmune diseases, a new study suggests. Three types of nanoparticles were found to ramp up protein citrullination in cell cultures, a change that can make the body think native proteins are foreign. This process has previously been linked to autoimmune disease.

Now, scientists in the US and Ireland have discovered that amorphous carbon and silica nanoparticles and carbon nanotubes, ranging in size from 40–200nm, can cause protein citrullination in cultured human lung and immune cells and in the lung tissue of mice. The scientists found that exposure to nanomaterials disturbs the cell membrane and increases calcium ion levels inside cells, which in turn activates the enzyme responsible for citrullination, peptidylarginine deiminase.

There is ‘strong evidence’ that smoking and inhaling silica are ‘risk factors for rheumatoid arthritis’, notes Benjamin Fisher of the Centre for Translational Inflammation Research at the University of Birmingham, UK. ‘It has been hypothesised that these factors work by increasing citrullination in the lung and there is evidence of citrullinated proteins in the bronchoalveolar cells of healthy smokers, for example,’ he says.

Yuri Volkov, an author of the paper at Trinity College Dublin, says the research has ‘established a clear link between autoimmune diseases and nanoparticles’. He notes that nanoscale silicon dioxide is widely used in electronics and cosmetics, for example, but adds that proper regulations and testing procedures should reduce the chances of people being exposed to harmful levels.

Anthony Nicholas, a neurologist at the University of Alabama at Birmingham, US, has studied citrullination for over a decade. He says that there is growing evidence for a causative role for these altered proteins in rheumatoid arthritis. ‘This is a landmark paper. It is the first to show a link between non-biological particles in the environment and this enzymatic process that perhaps can trigger an autoimmune reaction.’ Nicholas adds that understanding this molecular pathway could have therapeutic implications for diseases such as rheumatoid arthritis, multiple sclerosis, Alzheimer’s disease and Creutzfeldt-Jacob disease (CJD).

Not everyone is convinced, though. ‘Classical lung diseases caused by particles don’t involve autoimmunity,’ says Ken Donaldson, a particle toxicologist at the University of Edinburgh, UK, ‘and at least five years of nanoparticle work with animals hasn’t shown any autoimmune effects in animals.’ But he does not dismiss it out of hand. ‘Have they uncovered in this paper a new universal response that particles might elicit that might lead to disease? It is possible, but it seems unlikely to me.’

However, Fisher notes that antibodies to citrullinated proteins may not be sufficient for rheumatoid arthritis, as they seem to occur in healthy people years before onset. ‘Some further event, presumed to be an unrelated episode of joint inflammation, seems to be required,’ he concludes.