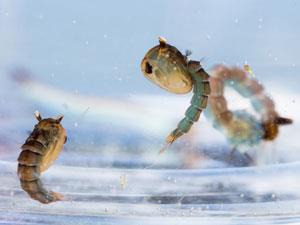 A simple synthesis for environmentally benign carbon nanoparticles that could be used to control mosquito populations has been demonstrated by scientists in India.

Mosquitoes are found across the globe, with the exception of Antarctica and Iceland. A holiday nuisance, they are also a well-known vector for many diseases, including malaria, dengue fever, yellow fever and viral encephalitis. The transmission of diseases by mosquitoes is estimated to be responsible for 2 million deaths every year.

Control or eradication of the mosquito population could significantly restrict the spread of disease. Screens and nets can be used to exclude the pests, while traps or insecticides can be used to eliminate them. More permanent solutions include draining pools of stagnant water where mosquitoes like to breed, or the introduction of natural mosquito predators such as dragonflies.

Sabyasachi Sarkar and his team of inorganic chemists at the Bengal Engineering and Science University have now come across a new answer to the mosquito problem. When trying to take pictures of zebrafish, that had been fed on mosquitos treated with water-soluble carbon nanoparticles (wsCNPs) to help with the imaging, they noticed that the presence of the wsCNPs appeared to be retarding the development of the mosquito larvae.

After further investigation, Sarkar and his team were able to show that a concentration of these wsCNPs as low as 3mg/l prevents the larvae from ever reaching maturity, resulting in their death. At this concentration, the wsCNPs are otherwise harmless to the surrounding environment and can persist in stagnant pools of water for periods of several months.

The nanoparticles are made by burning wood wool in a reduced oxygen environment, washing them and then treating them with nitric acid. ‘It is an easily scalable process,’ says Sarkar, ‘the mosquito eradication programs run by different government agencies across the globe should try this method, particularly in cities with poor drainage.’

‘It's very positive that the wsCNPs exhibit a high persistence in water and the local environment, as opposed to other synthetic insecticides that can quickly degrade,’ says Pilar Mateo, a leading specialist in the control of endemic disease transmitting vectors and President of Inesfly Corporation. However, she warns that further research is needed into potential long term ecological effects, before this material can be implemented as an effective method of vector control.

Sarkar’s team will now focus on gaining a better understanding of the mechanism that prevents larvae maturation. Suppression of the hormone, ecdysone, is suspected to be a factor and this could have vast implications for further research on mosquito control.