Easy to use dressing monitors oxygen levels in healing tissue

A group of researchers from the US, South Korea and Germany has developed a liquid bandage that can map oxygen concentrations in skin wounds and burns. 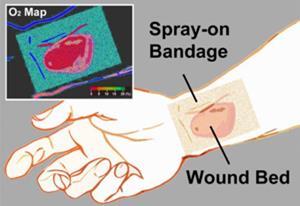 Damaged tissue requires a good blood supply to provide the regenerating cells with glucose and oxygen. Lack of either can lead to chronic sores, which means measuring oxygen levels is essential for wound treatment.

However, ‘current methods to assess wounds are either very subjective [such as sight or smell] or require highly specialised staff or equipment,’ says Conor Evans from the Wellman Center for Photomedicine at the Massachusetts General Hospital and Harvard Medical School, US. The common standard uses electrochemical analysis, which requires repeatedly inserting needle-like electrodes into the wound – a process many patients choose to avoid. Oxygen can also be measured by tracing radioactive markers with a positron emission tomograph, but this expensive equipment is not widely available.

Evans and his team have now developed a simple, non-invasive method to detect tissue oxygen levels: a liquid bandage that ‘glows blue–green when the tissue is oxygenated and red when there’s less oxygen’. The researchers incorporated a blue coumarin dye and a red phosphorescent palladium-containing porphyrin into an over-the-counter liquid bandage made of nitrocellulose. Using a camera and its flash, they triggered the metalloporphyrin’s phosphorescence and captured the resulting light emission. Oxygen quenches the phosphorescence, making the blue background dye visible, thus providing a colour map of oxygen concentration. A thin film on top of the bandage prevents false signals caused by atmospheric oxygen.

‘Most of the technology was already there,’ says Evans. ‘We’re trying to translate it and make it applicable and simple to use in real clinical situations’. So far the bandage has been used to monitor wounds and skin grafts on animal models, but Evans is hopeful the technology will soon be tested in the clinic.

‘Evans’ group has developed existing research into something highly viable [for clinical applications],’ agrees Otto Wolfbeis from the University of Regensburg, Germany, who developed a luminescent sensor foil for oxygen monitoring in 2011.

Evans’ team is now developing apps for Google glasses and Android phones, so that users can easily create oxygen maps with the device’s camera.

Wolfbeis also suggests incorporating pH sensors into bandages, as pH is another important factor in tissue regeneration. Evans agrees that future bandages could perform many more functions. ‘Ultimately, we would like to develop a smart bandage that can not only sense oxygen but also measure pH, detect bacteria and even release drugs.’