Carbon nanotubes (CNTs) have been used as a delivery vehicle for tiny pieces of RNA to minimise brain cell death during and after a stroke. Rats given the nanotube therapy performed better than controls in physical skills tests after a stroke was induced and the researchers believe that this treatment could be used to tackle other neurodegenerative diseases, although questions remain over the safety of the nanotube vehicle.

Stroke is the second biggest killer worldwide. When a patient has a stroke it results in traumatic brain injury. This injury leads to increased activity of an enzyme, which results in a concomitant rise in programmed cell death. Inhibiting this enzyme would result in fewer neurons dying after a stroke, which would, in theory, help the stroke victim to avoid some of the debilitating physical effects, such as difficulty walking. Unfortunately, it is very difficult to target the enzyme at the site of injury in the brain. 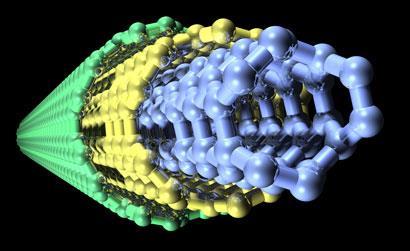 Now, scientists led by Tommaso Pizzorusso at the National Neuroscience Research Institute in Pisa, Italy and Kostas Kostarelos at the University of London, UK, think they have found a way to inhibit this enzyme in the brain. They used ammonium-functionalised multi-walled CNTs to deliver small interfering RNAs - nucleic acids which block gene expression - to stop production of this enzyme. Rats that received an injection of the CNT-siRNA complex directly into the brain performed better in food retrieval tests than controls, after a stroke was induced. Although the effects were more pronounced if the siRNAs were administered before the stroke, injecting them after the stroke is still beneficial.

Pizzorusso believes that the work proves nanocarriers can deliver siRNAs to treat stroke. ’We need chemists to prepare nano-vehicles with the best biocompatibility, and the best abilities to carry and release the siRNA once in the cells,’ he says. He says that protecting neurons in this manner should be combined with research to obtain better function from the remaining neurons after stroke damage. This combination should preserve more brain cells and enable the preserved cells to work better.

’Our overarching hypothesis is that if we take CNTs coated or conjugated with small molecules and inject them directly into tissue, these materials are capable of piercing the cells as if they were an extension of the syringe,’ Kostarelos says. While there may be debate about the carrier, this is one of the first CNT-based treatments to have piqued the interest of clinicians and it is an important step forward for nanomedicine, he adds. Kostarelos’s group is now looking at what happens to the CNTs after the treatment is administered, and says that this therapy could be used in other neurodegenerative diseases.

Vincent Rotello, an expert in nanomaterial drug delivery at the University of Massachusetts, Amherst, US, says that ’localised administration provides a means of increasing therapeutic efficacy while minimising collateral effects. Questions of long-term toxicity of the CNTs remain; however, this therapeutic strategy could be readily applied to other vehicles.’