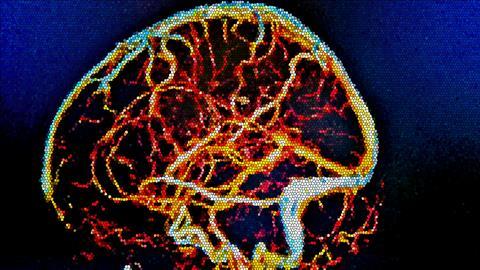 Current therapeutics for treating stroke are usually about damage limitation. But now researchers in the US have found that injecting an amorphous and non-fibrous hydrogel containing a growth factor and another bioactive compound could aid neuronal recovery in the spaces left by stroke damage. This new approach might represent a first step towards an intervention that can actually treat stroke, even after the initial damage has been done.

There are two types of stroke. The first is the ischaemic attack in which the oxygen supply to a part of the brain is blocked by damage to an artery, a clot or something else. The second is a haemorrhagic stroke in which a bleed into the brain causes the damage. Both can result in the death of neurons and subsequent loss of function associated with the affected part of the brain, such as speech or motor control. Severe damage will inevitably lead to the death of the stroke victim. Various physical and pharmaceutical interventions are available but none of them are as effective as clinicians would like.

Tatiana Segura at Duke University and S Thomas Carmichael of the University of California, Los Angeles and colleagues have devised what they call a dual-function injectable angiogenic biomaterial. This material offers a two-pronged response to the harm done by a stroke. Fundamentally, stroke is the primary cause of disability simply because the brain has only a very limited ability to regenerate damaged tissue. Physically speaking, the inflammatory and immune responses following stroke coupled with the low level of new blood vessel and neuronal growth that occurs leads to a cavity in the brain that is devoid of normal brain tissue.

Pharmaceuticals that can trigger new blood vessel growth, angiogenesis, can help as can interventions that inhibit the inflammatory and immune responses. The novel approach taken by the team uses a substance that can modulate the immune response and trigger blood vessel growth within a stroke cavity. The hydrogel is a scaffold where cells can grow and also a delivery medium for the vascular endothelial growth factor (VEGF) and heparin. VEGF – as its name suggests – promotes angiogenesis, and is delivered bound to a nanoparticle. Heparin is generally known as a blood-thinner; however, here it is delivered as nanoparticles, which retain their ability to bind growth factors such as VEGF, while having a markedly reduced blood-thinning ability.

Together these substances promote tissue formation and in turn this resulted in the formation of axonal networks forming along the new blood vessels in an animal model of stroke. The authors explain that this newly regenerated tissue produced functional recovery in the mouse model of stroke that is not seen with other conventional treatments.

Mike Modo, a professor of radiology and bioengineering at the University of Pittsburgh, explains: ‘This work demonstrates that brain tissue engineering is possible and might only require a few structural and functional elements to kick-start the endogenous regenerative potential of the brain.’ Given that the regrowth of axonal connections after volumetric tissue loss in the brain is a core challenge for engineering new functional brain tissue, the approach has many merits. ‘The authors here demonstrate that structural support within the tissue cavity through a bio-scaffold and the release of a single angiogenic factor, such as VEGF, might be sufficient to promote re-vascularisation of the tissue void and reconnect two brain regions with each other,’ Modo explain further.