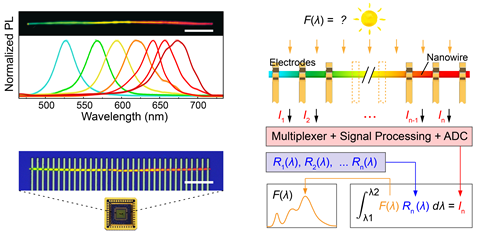 Researchers in the UK, China and Finland have produced spectrometers that are around 50–100µm long, which they believe are the smallest ever, based on single nanowires. Using the spectrometers, the team, led by the University of Cambridge’s Tawfique Hasan, spectrally imaged onion cells and part of the university’s coat of arms. ‘A miniature spectrometer has huge potential for consumers, as well as for scientific fields,’ says Hasan.

Hasan’s team members Zongyin Yang and Tom Albrow-Owen had started out their PhDs studying materials to broaden the range of light colours that individual photodetector devices can convert to electronic signals. Using chemical vapour deposition, Yang had previously grown semiconductor nanowires made mostly of CdS at one end, gradually changing composition to become CdSe. As such, the light colours absorbed varied along the nanowire’s length. ‘This beautiful nanowire actually covers quite a big part of the visible range,’ Hasan explains.

Wondering how to exploit these nanowires, the scientists made a conceptual leap from individual photodetectors to a spectrometer. Conventional spectrometers usually need bulky or complex optical components to split light into different colours, and then use different detectors to measure them. Albrow-Owen developed highly controlled processes that allowed the team to divide the nanowire into up to 38 sections, by depositing indium/gold electrodes at regular intervals. 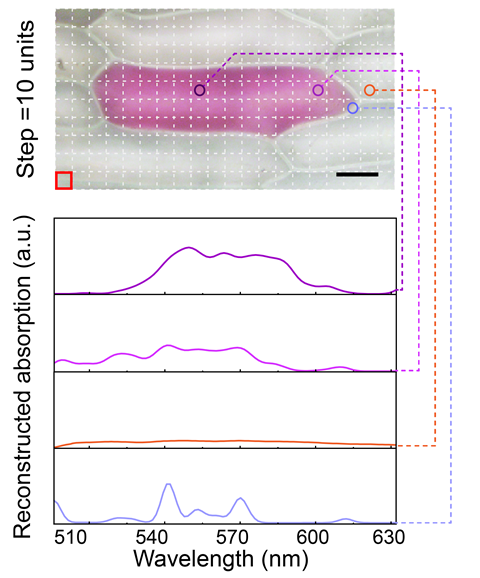 When light falls on individual sections, it produces an electronic current which is dependent on the wavelength of the light and the composition of the material at that section. The team devised an algorithm that cross-referenced the various output currents with precalibrated responses and corrected measurement errors to reconstruct the full incoming spectrum. Simply by scanning them across objects of interest, without the need for bulky optics, these devices can produce spectral images. In such images, each individual pixel contains information from across the visible wavelength range.

Because the device has no moving parts it wouldn’t need to be regularly recalibrated like existing spectrometers, Hasan tells Chemistry World. But the team now wants to array many nanowire spectrometers together to take snapshots of an area all in one go, and avoid the need to scan across it.

‘This is an interesting approach which yields a valuable proof of concept for the extreme miniaturisation of spectral detection, although scalability challenges remain,’ agrees Andrew Marshall, who develops new materials for photodetectors and other next generation electronic devices at the University of Lancaster, UK. ‘Such miniaturisation is highly desirable because it opens up new applications in both the specialist and consumer fields.’

As such the researchers have applied for a patent, and are considering combining spectrometers with microfluidics to study individual cells, Hasan says. Among many other possible applications, he also suggests they could be integrated with smartphones so that users could analyse the food they’re buying.