Putting rigid copper oxide on probe prevents artefacts – but what is it actually measuring? 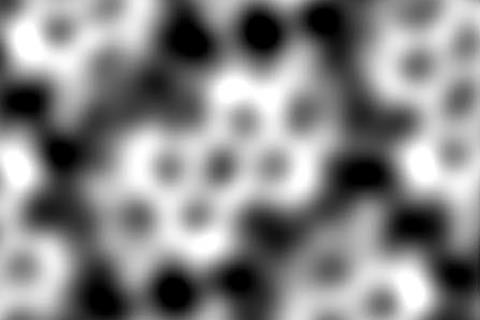 A rigid copper oxide AFM tip shows lines between molecules where hydrogen bonds should appear, thought to be artefacts in images with carbon monoxide tips

‘We checked a molecular system where we knew a carbon monoxide tip would make an artefact, and we didn’t see the artefact,’ explains Harry Mönig from the University of Münster, Germany. Mönig’s team then looked at a system containing hydrogen bonds. Other scientists previously used simulations and measurements of non-hydrogen bonding systems to show that lines where hydrogen bonds should appear might arise from nearby atoms tilting carbon monoxide tips. But with a non-tilting copper oxide tip, ‘we could still see the hydrogen bonds’, Mönig says.

Originally, Mönig’s team was exploring catalytically reactive sites on copper oxide surfaces. They were scanning an AFM probe, similar to a record player needle, across a small area and mapping the force it experiences. Like many groups, they pressed the probe a few tenths of a nanometre into their surfaces to pick up surface atoms, creating an atomically sharp tip.

The Münster team found that this most frequently produces a tip with a tetrahedral arrangement of a single negatively-charged oxygen atom beneath three copper atoms. Both their measurements and density functional theory calculations showed this to be rigid and chemically inert. Mönig therefore realised these tips might overcome carbon monoxide’s issues with systematic over-estimation of bond lengths, image distortion and even bond-like artefacts.

Using copper oxide tips, the team accurately measured bond lengths in C60 buckyballs ‘with extremely high accuracy, in the picometre regime’, Mönig asserts. The scientists also showed there were no artificial bond-like features in images of model molecules. Additionally, they imaged unusual intermolecular three-centre nitrogen-gold-nitrogen bonds, and characterised the strength and configuration of individual hydrogen bonds. ‘Although our tip is at least one order of magnitude more rigid, the intermolecular bonds appear with a similar or even slightly more pronounced intensity as compared to carbon monoxide tips, which excludes tip tilting as their origin,’ Mönig says. 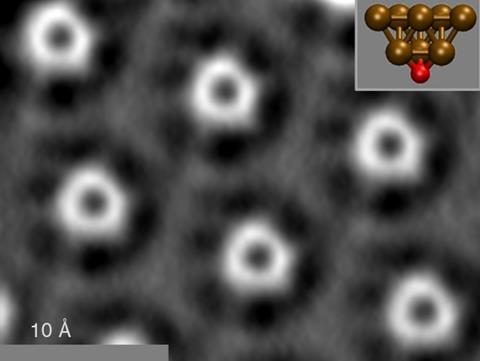 However, copper oxide tips are even more difficult to use than carbon monoxide tips, which themselves can take a day or more to prepare. The scientists must produce a particular contrast pattern in force maps on a copper oxide surface serving as a unique fingerprint for a copper oxide tip, before using that tip elsewhere. ‘It’s experimentally extremely demanding but we found a good routine to do this reproducibly,’ Mönig says. Images are also blurrier than with carbon monoxide tips, which experience fewer interfering van der Waals forces, and whose tilting creates an artificial sharpness.

Xiaohui Qiu from the Chinese National Centre for Nanoscience and Technology in Beijing, whose team produced the first hydrogen bond AFM images, calls the paper ‘wonderful’. ‘It confidently proves that image contrast can only be produced at the exact locations where electron densities are anticipated, giving compelling evidence that both intra- and inter-molecular bonds are real entities,’ he says.

Franz Gießibl from the University of Regensburg in Germany calls the study a ‘nice piece of work’, but is cautious about the interpretations Mönig’s team makes. ‘To me it’s not clear why you should see a hydrogen bond in a repulsive interaction,’ he says. ‘The hydrogen bond discussion doesn’t end with this.’