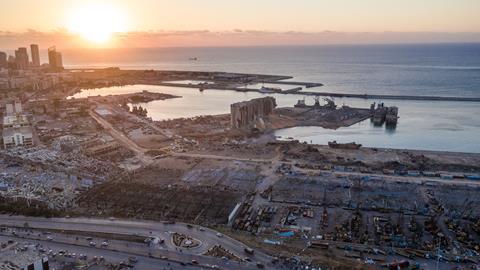 New light has been shed on the size of the explosion in Beirut, Lebanon in August 2020 that killed more than 200 people and injured thousands more. Estimate of the explosive yield of the blast, which resulted from the detonation of thousands of tonnes of improperly stored ammonium nitrate and damaged more than half the city, have varied widely. In some cases, these figures were inconsistent with what would be expected based on the amount of ammonium nitrate stored at the harbour, as well as the crater size, seismic magnitude and mushroom cloud height, according to researchers from Lawrence Livermore National Laboratory (LLNL) in California.

Official records indicate that roughly 2700 tonnes of ammonium nitrate were stored at the Beirut harbour warehouse that blew up. The detonation – one of the largest non-nuclear explosions in history – created a large crater, and seismic measurements suggested that the yield was anywhere from a few kilotonnes of TNT to much more. But other estimates suggest that the explosion was significantly smaller, maybe as little as half a kilotonne. Now, new analysis by LLNL physicist Peter Goldstein has assessed the crater dimensions, seismic magnitude estimates and the cloud height of the explosion, and concluded that all the data are consistent with a yield of around a kilotonne.

By comparison the largest non-nuclear explosion occurred in Halifax, Canada in 1917 when a transport ship carrying picric acid, TNT and fuel collided with another ship. The resulting explosion has been estimated at 2.9 kilotonnes of TNT.

Goldstein and his team determined the yield by using crater-size observations from satellite imagery and empirical data for scaled crater radii from past chemical and nuclear explosions. ‘The evidence suggests that the relatively large crater radius is due to a high degree of saturation of the ground beneath the explosion,’ he explained. ‘It is likely that this saturation increased coupling of shock wave energy to the surrounding material and reduced the effective stress/strength of the material.’

Other measures, including the maximum debris cloud height and the observed crater depth, corroborated the estimates based on crater radius.

Effective emergency response planning to address potential consequences from accidents like the Beirut explosion, or deliberate attacks with weapons like improvised nuclear devices and radioactive dispersal devices, requires these models to be trustworthy.

The new LLNL research also has implications for nuclear explosions, indicating that environmental features can substantially affect shock and blast waves, seismic motions and crater formation, as well as fallout. The effects also feed into things like the yield estimate, Goldstein noted. He said he expects features like water close to the site of the explosion to have a significant effect on other explosion phenomena, including the transport of radiation and the formation of post-detonation debris.