Computational scientists in China have simulated a graphene allotrope featuring different hybridisations of carbon that becomes a semiconductor when compressed.

This new allotrope, Me-graphene, combines sp3-hybridised carbon atoms anchored to four neighbouring benzene rings with sp2-hybridised carbon atoms. The result is a one-atom thick structure containing octagons, hexagons and pentagons, which is open and slightly corrugated. The structure could give scientists a way to bridge differences between the characteristics of traditional graphene (an electronically conductive semi-metal) and the so-far theoretical semiconductor penta-graphene. 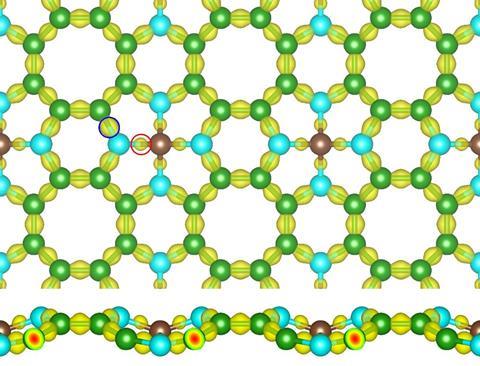 Source: © Xiaojun Wu/University of Science and Technology of China

Despite having exceptional strength, thermal and electron conductivity, traditional graphene’s use in electronic components (rather than just connections) is limited, as it can’t easily switch between conducting and insulating states. This is because it lacks a bandgap.

Xiaojun Wu of the University of Science and Technology of China and colleagues have discovered that Me-graphene could be structurally stable up to temperatures of 3500K. Added to this, it has higher mobility of charge at room temperature than silicon and when compressed it turns into a semiconductor with a large bandgap but does not deform. And, with a calculated energy of formation that is more achievable than other graphene allotropes, Wu’s team suggest Me-graphene’s characteristics could see it feature in next-generation nanoscale electronics and photoelectrics.