An international team of researchers has produced sizeable amounts of a new radioisotope, paving the way for its use in cancer therapy. The isotope, terbium-161, emits a number of low-energy electrons upon decay, which should make it useful for treating small tumours.

Radioisotopes are commonly used to treat cancer. Normally, an isotope is attached to a special ’bioconjugate’ molecule - an antibody, for example - that preferentially binds to cancer cells, so that the isotope only destroys diseased areas. As the isotope decays it emits radiation which ionises the cells’ DNA, stalling the tumour’s growth.

However, finding radioisotopes with exactly the right characteristics for the job is difficult. Typically they need to have a relatively short half life so that they do not have a prolonged effect on the patient, and the radiation they emit needs to be relatively short range so only nearby cancer cells are exposed. On top of this, physicians need pure isotopes in large quantities to create a treatment course. 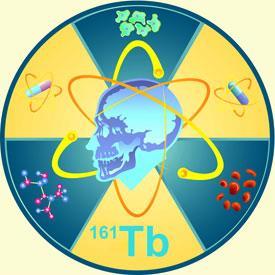 One of the newest and most attractive medical radioisotopes is lutetium-177. With a half-life of about six and a half days, it is still ’hot’ when it reaches hospital, but can cause problems after treatment as it hangs around. It also emits mostly short-range, low-energy beta particles (electrons), so the damage to healthy tissue is minimal. But now Konstantin Zhernosekov of the Technical University of Munich, Germany, and colleagues have produced a radioisotope that appears even more promising than lutetium-177: terbium-161.

For every beta particle emitted by decaying lutetium-177, terbium-161, which has a half-life of seven days, emits, on average, two extra low-energy Auger electrons. This means that, dose-for-dose, terbium-161 should be able to kill cancer cells faster.

Zhernosekov’s group produced samples of terbium-161 from gadolinium-160 using the intense neutron flux at the Institut Laue-Langevin, France. The samples had an activity of between 3 and 7GBq - enough for a clinical dose - and the researchers say that they could scale up the process to produce hundreds of doses per week.

Eva Forssell-Aronsson, a medical physicist at the University of Gothenburg, Sweden, who has studied the usefulness of terbium-161, agrees that the isotope should work better than lutetium-177. ’I would clearly be interested in a comparison between terbium-161 and lutetium-177 in experiments and patient studies in the future,’ she says.

Zhernosekov says he has already been asked for clinical samples. ’They’re interested because they already have a large experience with [lutetium-177], and [want] to have another which is very similar and can be substituted, and can be better,’ he says.??