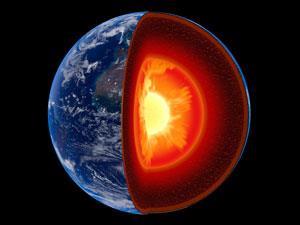 A new answer to where Earth’s missing xenon has gone – the planet’s atmosphere contains less than 10% of the gas anticipated – has been put forward.1 As the Earth was forming billions of years ago computational models predict that atmospheric xenon could have been locked away as iron and nickel compounds in the planet’s core, where it would remain to this day. Other researchers applaud the work, but remain sceptical that it will solve the paradox because of the practical difficulties of transporting xenon to the Earth's core.

Relative to lighter noble gases such as argon and krypton, the proportion of xenon in the Earth's atmosphere is much lower than that trapped in meteorites called carbonaceous chondrites, which are generally accepted to be the raw material that made up the Earth. Several explanations have been proposed to explain this mismatch.

Some suspect the xenon was selectively removed from the Earth. For example, experimental geoscientists Svyatoslav Shcheka and Hans Keppler of the University of Bayreuth, Germany, suggested in 2002 that argon and krypton dissolved in the primordial magma ocean, leaving the insoluble xenon to be blown away by meteorite bombardment.2 When the magma solidified, argon and krypton would have been released back into the atmosphere. Others have suggested various ways that the xenon might still be sequestered inside the Earth, such as Artem Oganov and colleagues, who suggested in 2012 that oxides and silicates in the Earth's mantle could contain small amounts of xenon impurities.

Computational physicist Yanming Ma and colleagues from Jilin University in China used their own electronic structure algorithm to calculate that, under the extreme pressures and temperatures found in the Earth's inner core, xenon could form several stable intermetallic compounds with the core's principle constituents iron and nickel. The most stable were XeFe3 and XeNi3. An alternative algorithm developed by co-author Chris Pickard's group at University College London gave similar results. ‘Xenon–iron and xenon–nickel are the only known compounds [of xenon] that are physically and energetically stable in the interior of the Earth at this moment,’ says Ma. Their calculations shows argon and krypton would not form analogous compounds.

Both Oganov and Shcheka are impressed by the fundamental chemistry, with Oganov describing the formation of ‘a stable, stochiometric compound’ of a noble gas as ‘a new world in chemistry’. Neither is convinced that the findings solve the missing xenon paradox, however. Oganov points out that the researchers' own data show that the xenon compounds are unstable until they reach core pressures, so asks how iron and nickel could have taken xenon into the core with them. Shcheka, meanwhile, says that geochemical evidence suggests the missing xenon vanished very early, whereas the inner core formed later in Earth's history and asks ‘where was the xenon in the period between the Earth's formation and the onset of core formation?’