For years, undergraduate chemists have been shown pictures depicting the atomic orbitals of atoms as described by the Schr?dinger equation. But now, researchers from the Kharkov Institute for Physics and Technology, Ukraine, have gone one better and managed to directly image the electron density surrounding a carbon atom - unveiling the shapes of both s- and p-like orbitals. 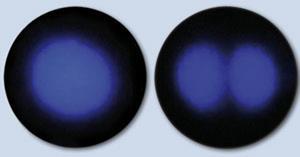 FEEM has allowed us to ’see’ s- and p-like orbitals

Using a technique known as cryogenic field-emission electron microscopy (FEEM), the researchers studied the carbon atoms at the end of a chain of single carbon atoms formed by unravelling a sheet of graphene. By improving the resolution and sensitivity of the technique the team observed both spherical and dumbbell-shaped areas of electron density.

They found that these electron density maps correspond closely to the electron density patterns predicted by the Schr?dinger equation for 2s and 2p orbitals. This work will be published soon in Physical Review B  .

Korean chemists have created ultrathin nanosheets of acidic zeolites, and found that they are efficient and long-lived catalysts for hydrocarbon cracking and other petrochemical applications.

The team’s sheets are grown on a surfactant template. The surfactant molecule has a polar head group around which the aluminosilicate zeolite crystal grows, and a long hydrocarbon tail which prevents the sheets from aggregating together into larger, three dimensional crystals. When the surfactant is removed, these flakes pile up randomly with gaps in between.

In test reactions, the nanosheets showed increased activity when compared with the same weight of a standard zeolite catalyst. The team also found that the nanosheets had extended lifetimes when used to catalyse the conversion of methanol to hydrocarbon fuel. The research is reported in  Nature   (DOI: 10.1038/nature08288).

A sensor that can differentiate between the volatile organic compounds (VOCs) in the breath of lung cancer patients and those of healthy people has been developed. The device may eventually lead to a cheap, portable real-time breath test for the disease.

The levels of 33 common VOCs that are characteristically in the breath of lung cancer sufferers can be measured, as each film is broadly responsive to a variety of the compounds. The work is reported in Nature Nanotechnology  (DOI: 10.1038/nnano.2009.235).

France is to impose a carbon tax for households, transport and small businesses - to encourage people to use less fuel. The tax will be introduced in the 2010 budget, initially set at

17 (?15) per tonne of carbon dioxide with increases expected. This will add about

0.04 per litre to petrol and slightly raise gas prices. Electricity will be unaffected, as most of France’s electricity comes from nuclear power (carbon neutral) sources. Heavy industry and power stations included in the EU emissions trading scheme are also exempt.

Nicolas Sarkozy, the French president, said that the initiative is meant as an incentive to drive down fossil fuel usage, and that the money obtained will be returned to the tax payers by means of income tax cuts, and the unemployed will be assisted with benefits.

Finland, Sweden and Denmark introduced carbon taxes in the early 1990s, but France is the first country to do so in recent years.

Nitrous oxide is currently the single most important manmade substance reducing ozone in the atmosphere, according to US researchers.

The team used a well-known atmospheric model to examine the ozone depleting potential (ODP) of nitrous oxide, and found that while it is much smaller than that of chlorofluorocarbons (CFCs), it is comparable to the ODP of many hydrochlorofluorocarbons (HCFCs). Levels of CFCs and HCFCs in the atmosphere have significantly reduced thanks to the Montreal Protocol which restricted their use, but the team claim that the importance of nitrous oxide has been overlooked.

Publishing in Science  (DOI: 10.1126/science.1176985), the researchers suggest that curbing nitrous oxide emissions could help speed up recovery of the Earth’s protective ozone layer and, since nitrous oxide is also a greenhouse gas, could also be a way to tackle global warming.

The European Chemicals Agency (ECHA) has proposed a further 15 chemicals to be added to the list of substances of very high concern - meaning they could not be sold in Europe without specific authorisation.

Substances identified include the industrial chemical acrylamide, a suspected carcinogen, and the plasticiser diisobutyl phthalate, which is thought to be carcinogenic and toxic to reproduction.

Public consultation is now open until 15 October, and once confirmed these will be the second set of chemicals selected for authorisation under the EU Reach legislation; the first group was selected in June (see Chemistry World, July 2009, p8).

If recommended by the ECHA, the decision will still have to be endorsed by the European Commission, which could take up to four years to complete.

US researchers have shown that, contrary to popular belief, antioxidants don’t always protect us from cancer. 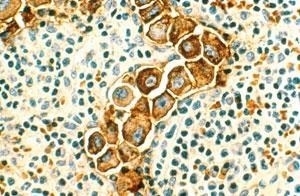 Breast cancer cells under the microscope

The team at Harvard Medical School in Boston found that breast cancer tumour cells use vitamin E-like antioxidants to block the usual programmed cell death cycles, enabling them to survive and proliferate. The changes caused by the antioxidants allow the cells to survive free from their usual scaffolding by switching their metabolism to use fatty acids rather than glucose as fuel.

Publishing in Nature  (DOI: 10.1038/nature08268), the researchers explain that normal cells need to be attached to a matrix to survive but when potential tumour cells start to proliferate rapidly, they quickly run out of space and have to detach from the matrix. The team say that this insight into how tumour cells dodge the normal mechanisms by which detached cells are programmed to die could help improve current medical treatments.

FutureGen, the US’s first commercial-scale carbon capture and sequestration project, has secured funding to continue with preliminary research through to the end of 2009.

The $17.3 million (?10.4 million) will be provided jointly by the Department of Energy and the FutureGen Alliance - a consortium of international power companies responsible for designing, building and operating the facility.

Research to be done this year includes continuing electric grid interconnect studies, working towards securing environmental permits, finalising the design and carrying out detailed cost estimates. Depending on the outcome of this research, a decision will be made as to whether to continue with this project in 2010 (see Chemistry World, August 2009, p14).

The UK Royal Society has released the findings of a major study into which geoengineering technologies are likely to be most useful in reducing greenhouse gas emissions.

The study concluded that methods to remove carbon dioxide from the atmosphere (such as carbon dioxide capture and ocean fertilisation) were preferable to techniques for reducing the amount of sunlight absorbed by the Earth (using stratospheric aerosols or putting huge mirrors into space).

The authors, 12 leading academic scientists, proposed that the UK government should provide ?10 million per year for the next 10 years to fund further research in this area. It was also suggested that an international code of practice for geoengineering research was adopted.

However, the report stated that geoengineering methods should only be used as a fall back plan, and that global emission reduction targets of at least 50 per cent on 1990 levels by 2050 and more thereafter should be agreed at the UN climate change meeting in Copenhagen in December.