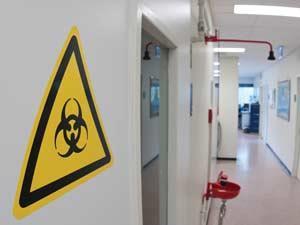 After a smallpox sample was found in an unused storage portion of a lab on the campus of the US National Institutes of Health (NIH) back in July, the agency initiated a sweep of its facilities to uncover any improperly stored dangerous agents, toxins or hazardous biological materials. That search has now revealed several instances of lax oversight on the agency’s Bethesda, Maryland campus.

On 5 September, NIH director Francis Collins provided an interim update in a memo to staff, announcing the discovery that five such potentially harmful infectious materials weren’t appropriately stowed in various NIH buildings. These so-called ‘select agents’, which are required to be reported to the authorities and maintained under strict controls, include two small lab vials of the plague bacterium Yersinia pestis, as well as a bottle of the potent toxin ricin. In addition, the search turned up a patient microbial isolate of Burkholderia pseudomallei, which causes an uncommon bacterial infection known as melioidosis, as well as the Botulinum neurotoxin that causes botulism, and the causative agent of tularemia Francisella tularensis.

In his memo, Collins emphasised that all of these samples were in ‘sealed and intact containers’, and that no personal exposures were associated with their discovery or storage. He said the materials have all now been reported to the Centers for Disease Control and Prevention (CDC) and destroyed. Collins said the NIH will continue the ‘comprehensive search’ of its labs to ensure the safe and compliant storage of select agents and other potentially hazardous biological materials. The agency will release a final report in early October.

The NIH discovery follows a White House directive in August that required all government labs studying infectious agents to take ‘immediate action’ to inventory samples and review safety and security procedures, and then develop and implement plans for sustained inventory monitoring. In addition to this ‘safety stand-down’, the administration is strongly encouraging non-government scientists who work with infectious diseases to voluntarily work alongside their government colleagues in implementing the steps it has outlined.

The White House’s lab safety drive was sparked by several high-profile incidents earlier this year, including the potential exposure of more than 70 CDC lab workers to live anthrax in June, and the accidental cross-contamination of non-pathogenic avian influenza with the highly pathogenic H5N1 strain of influenza.