Researchers from the US have demonstrated a new catalyst support structure allowing two incompatible catalysts to work in tandem. The work mimics nature’s strategy of compartmentalising reactions and may open up new avenues for one pot syntheses for multi-step reactions. 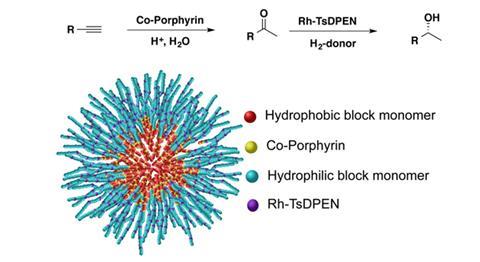 One pot reactions are attractive because several steps take place in one vessel, in the same solvent. This reduces time and waste associated with purification between steps. However, catalysts for different stages of the synthesis may interfere if mixed together, preventing the desired product from forming. To overcome this problem, individual steps can be physically compartmentalised, often by fixing the catalysts to separate supports, so they cannot interact with each other.

Marcus Weck and his group from New York University have created a polymer support that forms spherical micelles with a hydrophobic core and a hydrophilic shell. By introducing a cobalt complex into the core and a rhodium complex into the outer shell, the micelle can catalyse two reactions to transform alkynes into chiral alcohols. Reactions with the micelles demonstrate good selectivity and higher yields than either the stepwise reaction or with separate micelles containing each catalyst, which is attributed to the reaction intermediates diffusing easily between the two layers of the micelle.

Weck says his research was inspired by the reactions that occur in cells. ‘In nature, reactions with different conditions are placed into “pockets” in the cell, preventing the different reactants from flowing together and destroying each other,’ he explains. ‘We wanted to apply this idea to transition metal catalysis.’

Unlike biological catalysts, which rely on complex protein folding to create chiral pockets, transition metal catalysts are easy to modify. This means ligands attached to transition metal catalysts can be simply swapped out to tune the catalyst’s properties. As a result, Weck’s system could easily be adapted for other reactions with incompatible catalysts. Weck intends to extend this work to include three or four catalysts in a single one pot reaction. He likens a multi-catalyst system to a car factory. ‘One person installs the motor, the next the wheels. We want to build a small factory of catalysts to install several chiral centres in the molecule.’

Andrew Sutherland from the University of Glasgow, UK, believes that the impact of this work could be significant. ‘If the use of these micelles can be generalised and extended to include a greater number of incompatible catalytic transformations, then this could really lead to quite sophisticated one-pot multi-step syntheses of complex organic compounds,’ he says.