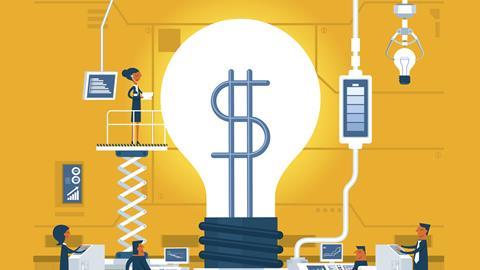 In late September 2016, Evonik invested $1.5 million (£1.2 million) in Vivasure Medical, a medical device company with a new closure device for heart surgery. It did so through its venture capital arm. The equivalent arm at BASF last year invested $4 million in QD Vision, a firm with quantum dot technology that promises better colour for LCDs. The number and total value of such investments is increasing rapidly.

Many chemical giants nurture their own corporate venture capital, or CVC, units, releasing them to prowl for new ideas and opportunities. ‘There’s a realisation that to be competitive you need access to as many good ideas as you can get, no matter how many R&D people you have,’ says David Gann, vice president (innovation) at Imperial College London, UK. It is part of a wider trend, with the corporate share of venture capital investment rising from 7% in 1995 to around 20% today.

BASF Venture Capital was set up in 2001 and has €175 million to invest. So far, it has backed 35 start-ups, mostly with direct investments of €1–6 million. Active since 2012, Evonik has made 13 investments and plans to invest €100 million in total. ‘There is a realisation that the only way to win is through innovation. And more industries are becoming more competitively intense,’ says Corey Phelps, professor of strategy and organisation at McGill University in Montreal, Canada. A wave of CVCs among all industries, led by the technology sector, began building around 2005.

CVCs are distinguished from their independent VC brethren though their dual objectives – financial and strategic. ‘We seek a deep and long-term relationship with a company: not only a financial interest, but also a strategic interest and desire to work closely with them,’ says Mohr. BASF Venture Capital also makes its decisions primarily based on strategy, says managing director Dirk Nachtigal: ‘We want to bring disruptive new technologies out of the VC sector and into contact with BASF.’ This gives big firms a window into new technologies or business models, but also gives the companies they supports access to corporate expertise and resources.

Robert Bosch Venture Capital (RVBC) says it invests in startups active in strategically relevant future markets. Companies benefit from connections with and introductions to the Bosch Group, via joint development efforts, manufacturing knowhow and support or supplier agreements. Such agreements offer the startup a chance to ‘build up customer references and credibility,’ according to RBVC. DuPont Ventures says it brings manufacturing expertise, commercialisation support and global science and testing. It invested in NexSteppe, for example, a seed company focused on crops for biofuels and biobased products.

Most often, CVCs foster commercial agreements rather than buying companies outright. This could be a licensing agreement, a supply relationship or a distribution agreement. But the dual mandate of a CVC is also a concern to entrepreneurs and co-investors, which invariably become part of these deals.

‘Independent VCs are purely motivated by financial returns. When co-investing with corporates who have a strategic interest, that becomes a potential conflict,’ warns Phelps. ‘Will they trade financial return for strategic? Do they want to learn its technology, learn its business model and compete against it? Suck it dry from a strategic point of view. That raises questions about motivation.’

Venture capital investing is politicised inside big companies, since money is going to an outside firm, rather than internal R&D

This is not how the chemical sector describes strategic interests. ‘We have in-house technology experts who can help companies. We know how to structure the intellectual property too,’ says Nachtigal. He gives the example of Nano H2O, which had a joint development agreement that saw BASF develop a new material used in its water treatment membranes. ‘It always has to be a win-win situation,’ says Nachtigal. Phelps says many CVCs admit in private that strategic interest trumps all.

Some in the chemical sector jumped early into the VC world, such as Exxon Mobil in speciality chemicals. ‘Chemicals were early into the corporate venture capital field, but looking at investments in the last three years they are clearly a laggard across industries,’ says Michael Brigl of BCG Consultants. His firm reviewed the top 30 chemical companies and discovered one-third had CVC units. For the technology sector, two-thirds host CVCs. Pharma, too, is more smitten by CVC, with Eli Lilly launching Lilly Ventures in 2001, for example. Pharma also seems more willing to try newer formulas, such as business accelerators and incubators.

CVCs may jump into the investment cycle later than peers, and get out quicker

‘There is such a strong focus around the core in chemicals, some probably say we can cover innovation with our internal R&D,’ says Brigl. But another contributing factor is large firms with no separate VC unit can fly below the radar. An example is materials science company 3M. When it started CVC investments, it used its corporate development group, usually responsible for mergers and acquisitions, Phelps explains. The company’s minority stakes then tend not to get reported or tracked.

CVC activity goes in cycles, says Phelps, and since 2005-6 we are in the fourth wave since the 1960s. CVCs may jump into the investment cycle later than peers, and get out quicker. They get concerned when portfolios suffer write offs, so cut activities, especially if no specialist CVC arm is involved, he says. ‘The history of CVC investment is characterised by relatively short-lived funds,’ he adds. This sort of behavior has left them somewhat disparaged as ‘dumb money’ by independent VCs.

That tendency to invest at a later stage is partly to the nature of the sector, says Brigl.  ‘In order to judge whether [an idea] is really disruptive, it needs to work in practice rather than be just at an idea stage.’ Typically Evonik invests in companies that have already entered the market or are about to do so, Mohr agrees.

Yet most CVCs in chemicals co-invest with other venture capitalists. And they have little trouble finding partners. ‘Independent VCs are co-investing to a greater degree with their corporate venture counterparts than they have in the past. That tells you something about the changing view they have of corporates,’ says Phelps.

Phelps’ research led him to interview over 20 corporate VCs; he says getting co-investors on board, so-called syndication, is essential for corporates for a number of reasons. ‘In all our investments, we syndicate with others, either strategic or financial investors,’ says Mohr.

Syndication is common practice in the VC world to spread risk. ‘Another reasons is essentially to join an old boys’ network,’ says Phelps, a network that shares investment opportunities. Deals vouched for by partners tend to be the best deals, whereas those submitted unsolicited are often discounted.

A third reason is that VC investing is politicised inside big companies, since money is going to an outside firm, rather than internal R&D. The question can come up, says Phelps: why are you investing in this stupid startup firm? But if a CVC can point to high level VCs as co-investors, it validates the decision and gives political cover. Finally, says Phelps, some CVCs will privately admit that independent VCs are the ones with the expertise to do the hardest thing in venture financing – pricing the deal.

In terms of internal R&D, BASF spends around €2 billion every year on 3000 research projects. It also has a web of relationships with 15 preferred universities around the world. Those arrangements mean BASF can just start working on research projects with those universities without negotiating new contracts or non-disclosure agreements.

Corporate venture capital spend is small beer in comparison, but it’s growing. BASF Venture Capital is increasing its budget; it has offices in Silicon Valley and Boston, US; Ludwigshafen in Germany; as well as Tokyo, Japan, and Hong Kong. BASF has a technology charter setting out its intentions to screen some 1200 companies each year, of which it will scrutinise perhaps 10% more closely and invest in two or three. ‘We bring companies into contact with our operating division or our research division and try to initiate some cooperation or collaboration,’ explains Nachtigal. ‘We also want a proper return on investment.’

Assessing strategic return is not straightforward. One measure is the number of co-operations initiated, says Nachtigal: ‘We look at the number of joint development agreements we make and sample testing activities each year.’ He views BASF Venture Capital as ideal moderators, knowing how both startups and big organisations work.

Data provider Global Corporate Venturing estimates that the number of active corporate venturing units has grown from 448 in 2011, to 801 in 2015, and around 1200 at the beginning of 2016. The number of deals went from 626 in 2011 to 1360 in 2015, but the value of those deals rose from $18 billion to $78 billion. With in-house R&D efforts increasingly focused on narrow project portfolios, CVCs can take on the role of identifying potentially disruptive advances, and forging alliances to convert those into opportunities rather than competitive threats.