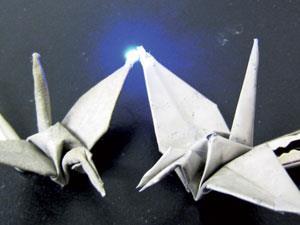 We normally think of electronic components as being inflexible but researchers in Japan are challenging this concept by reinventing paper. And they’ve used their paper electronics to create origami-style lights.

Antennas transmit and receive information and although they have been put on paper before, none of these antennas have been foldable. This is because the conductive materials struggle to stay on the coarse and porous surface of the paper, resulting in deterioration of their electronic properties. Now, Masaya Nogi and co-workers at Osaka University, have combined smooth paper, made from mechanically nanofibrillated cellulose nanofibres, and silver nanowire inks to make foldable antennas. To demonstrate the effectiveness of the antennas the team folded the printed nanopaper into origami cranes and showed they could be used in the illumination of a light emitting diode.

Michael Dickey, an expert in nanoelectronics, from North Caroline State University, US, thinks it is interesting work. ‘The ability to fold antennas may be important for flexible electronics or for changing the properties of the antennas by changing their shape,’ he says.

The group hopes the paper antennas could be used in a variety of applications, including wearable computers and healthcare sensors. However, to obtain these foldable electronics Nogi says that other bendable device components are also needed, for example, sensors, memory diodes and transistors, in addition to flexible materials to connect the components and protect them from moisture and air.

Nogi also adds that although the silver nanowires have already been commercialised, nanopaper still has not, despite its fabrication being reported in many scientific articles. ‘The group are looking forward to encouragement from the pulp and paper industry in helping to further the production of these materials,’ says Nogi.