A paper-based bacterial fuel cell that can power a calculator has been developed by US researchers, who say it could form the basis of cheap, flexible batteries or a lightweight environmentally friendly power source in remote areas of the world. 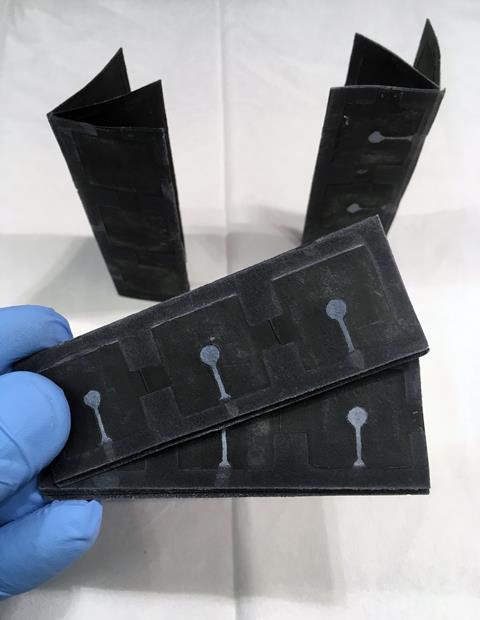 Researchers have been exploring paper for some time as a way to make electronic devices that are both flexible and lightweight, cheap to produce and biodegradable. ‘I think that paper-based electronics can be regarded as a next-generation electronic platform, because it can combine deformability, cost-effectiveness and electronic waste management,’ says Seokheun Choi from the State University of New York, who presented the work at the 256th American Chemical Society meeting in Boston, US.

Paper-based electronics that have been developed so far include circuits, sensors and microfluidic systems, but there is a still need for compatible power sources to create systems made entirely out of paper.

Choi thinks that microbial fuel cells may be preferable to other kinds of paper-based batteries such as electrochemical or enzymatic systems, which have only so far been able to achieve extremely low power outputs on the scale of a few microwatts (µW). Their technology makes use of bacterial species called exoelectrogens, which generate electrons while carrying out respiration that can be siphoned off from the cell. ‘We can harvest the electrons by providing a solid electrode,’ he explains.

The researchers print the metal components onto a paper substrate which is then inoculated with the bacteria and an acetate food source. Choi and colleagues found they could improve the power output of the fuel cells by first making the paper conductive, treating it with the polymer salt PEDOT:PSS, which forms conductive channels inside the paper’s microstructure that allows electron transfer from bacteria not in direct contact with the metal anode. They also showed they could improve the shelf-life of the paper fuel cells by freeze drying them. ‘Bacterial cells can be frozen and brought back to life,’ Choi says. ‘So that got us thinking “Can we use this technology for our application?”’

They demonstrated that inoculated fuel cells that had been freeze dried and stored at room temperature for four weeks could be reactivated in a few minutes by adding water or saliva with only a two-thirds drop in power output. By stacking three of the paper fuel cells together they made a prototype device that produced an output of 200µW and could power a standard calculator for half an hour.

Choi says he and his colleagues have applied for a patent and are hoping to attract industrial collaborators to commercialise the technology. He adds that they are still investigating ways to increase the power output of their fuel cell, which is still too lower for many real-world applications, as well as ways to improve their shelf-life.

Chemist George Whitesides from Harvard University in the US says he is ‘very impressed with the power density you can get with this system’, and says it could potentially be boosted by further engineering the paper substrate. ‘If they can find a way of simultaneously digesting the cellulose in the paper to glucose then that can serve as part of the fuel source,’ he says. ‘That might be able to increase [power output] by another factor of three or four.’