Australian chemists have identified the compound responsible for the peppery aroma of the country’s iconic Shiraz wines - and discovered the same molecule is by far the strongest aroma in peppercorns themselves.

’Wine makers had been noticing this peppery character in some Australian Shiraz wines - a positive, distinctive flavour attribute - so we were challenged by the wine industry to find out what this compound is,’ says Alan Pollnitz at the Australian Wine Research Institute, who led the team.

The researchers identified the compound as rotundone, first isolated from the grassy weed Cyprusrotundus in 1967. Struck by the similarity of rotundone’s smell to peppercorns, the team analysed a sample of commercial pepper - and found the same compound, in much higher concentrations. Though it’s a key part of pepper’s distinctive smell, no-one had detected rotundone before. 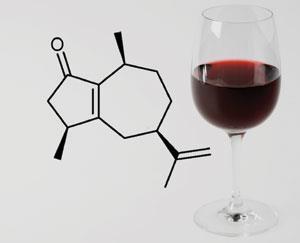 ’We were surprised to find that this is also the pepper compound in pepper as well,’ says Pollnitz. ’A lot of high quality publications have analysed peppercorn aroma, but everyone had missed it - probably because they were looking in the wrong place.’

For an aroma compound, rotundone is relatively non-volatile, explains Pollnitz. Complex flavours are typically analysed by separating them into their component compounds using gas chromatography, before passing each to human ’sniffers’ as well as a mass spectrometer.

Vanilla is typically the last flavour compound to elute during gas chromatography but rotundone appears afterwards - explaining why it has eluded chemists for so long. ’The rule of thumb in flavour houses is "don’t sniff past vanilla", and this compound does come out after vanilla,’ says Pollnitz.

However, while most panellists sniffing for rotundone’s distinctive aroma could detect it at very low levels, a fifth of the panel were unable to smell it at all. That’s not uncommon in flavour chemistry and suggests people sharing the same wine - or meal - may experience them very differently, says Pollnitz. ’When you think about the complexity of wine, with all the compounds in it, and then people’s relative sensitivity to them, it’s no wonder people argue about what a wine smells like, because it does smell different to all of us,’ he adds.

Having identified rotundone’s importance, Pollnitz’s next goal will be to find how winemakers can incorporate more of it into their wines. The team will investigate factors including different root stocks, the effect of climate, and different mine-making techniques, to show winemakers how to boost rotundone levels. ’Industry wants results - they want to know how to grow their grapes to get this compound,’ he says. ’Well, some of them do - some of them don’t, some of them have got this secret sewn up just because they happen to have their vineyards in the right spot!’

James Kennedy studies wine chemistry at Oregon State University, US, and agrees it is surprising that such a powerful flavour was overlooked in peppercorns for so long. ’Now we understand the compound involved, it will be interesting to see if we can manage rotundone levels in wine,’ Kennedy adds. ’The beauty of wine is that some people like this flavour, and others don’t - so some winemakers may be interested in decreasing pepper flavours in their wine.’