Two pharmaceutical powerhouses will have to pay hundreds of millions of dollars to address US government claims that they gave kickbacks to physicians across the country to induce them to prescribe their drugs. The charges led to the arrest of Warner Chilcott’s ex-president, Carl Reichel, on 29 October. 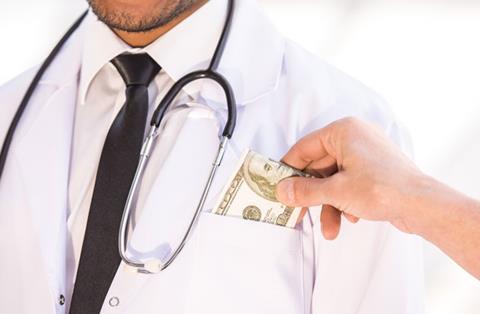 According to consumer rights advocacy group Public Citizen, individual prosecutions like in the Warner Chilcott case are needed

Warner Chilcott US Sales, a subsidiary of the Ireland-based pharmaceutical manufacturer, pleaded guilty last month to a felony charge of healthcare fraud. The agreement was part of a global settlement with the US government in which Warner Chilcott agreed to pay $125 million (£83 million) to resolve its criminal and civil liability arising from alleged illegal marketing of several of its drugs.

Prior to Warner Chilcott’s guilty plea and Reichel’s arrest, two of the company’s former district managers pleaded guilty to various charges, including conspiracy to commit healthcare fraud, and a third was criminally charged on a related matter.

‘Today’s enforcement actions demonstrate that the government will seek not only to hold companies accountable, but will identify and charge corporate officials responsible for the fraud,’ stated Carmen Ortiz, the US attorney for Massachusetts.

Meanwhile, Swiss pharma firm Novartis has agreed in principle with the US Department of Justice (DoJ) to settle a kickbacks claim for $390 million, according to the company’s latest quarterly financial report. The settlement has yet to be finalised, but the company is accused of inducing speciality pharmacies to boost prescriptions of its drugs by offering unlawful discounts and rebates in connection with Novartis’s immunosuppressant drug Myfortic (mycophenolate sodium).

In April 2013, the DoJ filed a lawsuit against Novartis alleging that the company illegally paid pharmacies to get them to switch kidney transplant patients onto Myfortic.

Pharmaceutical companies have been paying out settlements such as these for more than 25 years, according to analysis by the consumer rights advocacy group Public Citizen. Sammy Almashat with Public Citizen’s health research group, says the Warner Chilcott case is the first one in which several top executives have pleaded guilty or are being charged. These individual prosecutions are needed to change the current state of affairs, according to Almashat. ‘Right now, whatever fines that they may have to pay down the road pale in comparison to the profits that they can make by engaging in the criminal activity,’ he says.

Analysis released by Public Citizen in September 2012 found that the $30 billion in settlements paid out by pharmaceutical companies since 1991 represented just over two-thirds of the profits made by the 10 largest companies in 2010 alone.