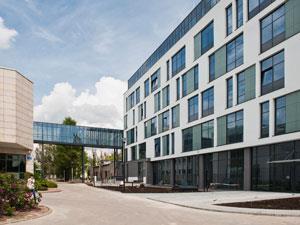 Polish universities are investing millions of pounds expanding and modernising their chemistry faculties’ infrastructure. However, despite this injection of new money a scientific brain drain remains a major cause for concern for the nation as other factors draw young talent away.

In late June, the University of Wroclaw opened  a new 11,000m2 chemistry and biotechnology research and educational facility that cost about PLN60 million (£12 million). The building was kitted out with a phytotron for studying plants’ interactions with the atmosphere, a stable isotope laboratory and facilities for research on potentially hazardous materials.

Not to be outdone, the University of Gdansk opened a 28,572m2 building of the faculty of chemistry, worth about PLN136 million in May. The investment covered the construction of new labs, lecture halls and related research facilities. The building has 188 chemistry labs, 15 all purpose labs and five lecture halls which can hold up to 600 people.

‘Owing to such investments … the University of Gdansk is becoming competitive in respect to higher education institutions in Europe and in the world,’ the minister of science and higher education Barbara Kudrycka told Polish news agency PAP.

The University of Warsaw has also just finalised the first phase of an investment intended to enhance the infrastructure of its applied sciences faculties. The launch of the biological and chemical research centre in the first quarter of 2013 has given scientists there an additional 133 laboratories. The investment, worth PLN200 million, has provided Polish chemists and biologists with one of the most modern research facilities in Europe, the university claims.

Pawel Kulesza, dean of the faculty of chemistry at the University of Warsaw, says that the investment significantly bolstered the faculty’s research capacity. ‘The laboratory equipment acquired for the centre is very advanced, but it is equally important to secure funding for purchases of reagents and other materials,’ Kulesza adds.

The three projects were carried out with co-funding from the EU .

Despite the recent investments, brain drain remains a major concern for the chemical sciences in Poland. Bartosz Grzybowski, K Burgess professor of physical chemistry and chemical systems engineering and director of the US Department of Energy non-equilibrium energy research center at Northwestern University, US, says there are several reasons why young Polish chemists emigrate. ‘It is not even the relatively small stipends during PhDs, ranging between around $500–$1000 (£325–£650) per month, but the lack of perspectives on what to do later, after graduation,’ Grzybowski says. ‘The perspective for the academically minded is daunting as the average age of becoming a professor is well above 50, which for a young, ambitious person means a perspective of some 20-plus years of work for someone else.’

Grzybowski adds: ‘If Poland wants to change this status quo, the government needs to start thinking now about promoting their top talent at an accelerated rate, and subsidising hi-tech companies started by young folks.’ He says that there is plenty of talent in Poland and some institutes have enormous potential.

‘As one example, take the institute of organic chemistry of the Polish Academy of Sciences in Warsaw. In this elite place, some 10 out of 70 PhD students are medalists of the International Chemistry Olympiad. But they need career opportunities to develop their talent. If properly motivated and rewarded, these kids could nucleate a Polish Scripps in Warsaw!’