Chemists have created single crystals of metal coordination complexes that explode violently when exposed to UV light, leaping high into the air. The effect, similar to the bursting of popcorn in a hot pan, results from light-activated polymerisation of molecules within the crystal, followed by an extremely rapid phase transition of the nascent polymer in its attempt to find a lower energy configuration. The phenomenon could be harnessed to create light-driven mechanical actuators, the researchers suggest.

For a number of years, Pance Naumov at New York University Abu Dhabi has been interested in how crystals respond mechanically to heat and, more rarely, light. A team at the National University of Singapore, led by Jagadese Vittal, contacted Naumov when their attempts to make metal-organic frameworks with zinc-pyridyl coordination complexes failed. The crystals popped vigorously under even weak UV light.

The researchers collaborated to delve into the phenomenon. Now, having deployed a range of analytical techniques, including powder x-ray diffraction and high-speed motion analysis, the team believes it has revealed the principal mechanisms at work.

The linear molecules align within the crystal in such a way that C=C double bonds lie adjacent to each other, perfectly set up for a [2+2] cycloaddition reaction. When the sample is irradiated with UV light, the alkenes snap together, creating cyclobutane rings linking neighbouring molecules. ‘There is then a very rapid reconstructive phase transition, around 10,000 times faster than is usually seen,’ says Naumov. ‘The structure tries to rearrange itself to release the strain, causing the crystal to explode.’ 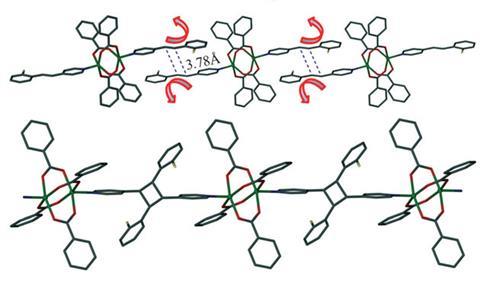 A light-activated reaction polymerises the molecules in the crystal, then the polymer rapidly rearranges to release the strain

The researchers are now experimenting with different molecules to fine tune the effect with a long term goal of investigating possible devices that produce powerful mechanical responses to light.

Christopher Bardeen of the University of California at Riverside, US, who has investigated photomechanical responses of solid state materials, says that the new study is ‘an interesting and important advance.’ He adds, ‘This ability to integrate the absorbed light energy and then release it in a burst of motion, rather than as a gradual expansion, could be useful in applications that require impulsive force.’

Philip Coppens, a crystallographer at University at Buffalo, US, describes the study as ‘a nice illustration of the stress induced in crystals by photochemically induced rearrangements,’ and an experiment that could be a valuable way to disseminate certain key scientific principles to an audience of non-specialists.