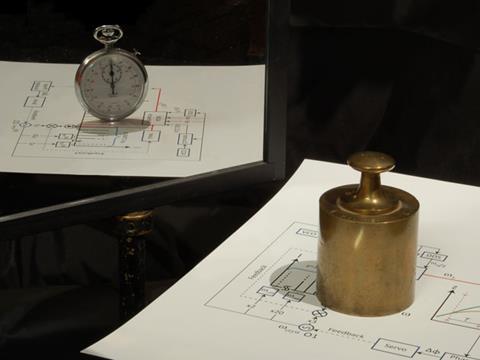 In a remarkable feat of quantum horology, scientists in the US have created a clock that derives its timing mechanism from nothing more complicated than the mass of an atom. Aside from its conceptual simplicity, the new clock could prove to be a new way to make highly accurate measurements of atomic mass.

Historically the measurement of time has relied on counting oscillations of regular periodic motion, such as the rotation of the Earth in relation to the Sun, or a swinging pendulum. Over the past 50 years atomic clocks have become the gold standard for precision, where electromagnetic oscillations within atoms provide a measure of time.

‘We wanted to see if it is possible to measure time with just one particle and nothing else,’ says Holger Müller of the University of California, Berkeley, who led the clock making research.

To get around this, Müller’s team constructed an established device called a Ramsey-Bordé atom interferometer. Here, caesium atoms are cooled to a fraction above absolute zero and are hit with short pulses of laser energy. In the interferometer the caesium atoms behave as ‘matter waves’. As the atoms are hit by the laser they are split into two ‘wave packets’. Subsequent interaction with the laser photons means that some of the wave packets are stationary and some moving. When the moving and the non-moving waves recombine, they produce an interference pattern that depends upon the difference of Compton frequency cycles between the two paths. By linking this to an oscillator, the output of the clock is obtained.

However, this system still requires an externally calibrated and controlled laser source – something that Müller wanted to eliminate. To do this the team incorporated into the system a device called a frequency comb oscillator. The interference patterns produced by the interferometer are fed back to the frequency comb, which in turn synchronises the incoming laser pulses to maintain the phase shifts, and hence the interference pattern – the clock’s ‘tick’.

‘We have closed the loop and can put everything into a black box,’ says Müller. ‘We can simply put the caesium atom in and get the frequency out. We have made a clock whose sole input is the mass of a single particle.’

The clock itself is, however, not fantastically accurate by today’s atomic clock standards – it loses around one second every eight years. This could be improved, says Müller, but it might be interesting to invert the concept to use the clock not as a timepiece but as a way to measure mass, through the defined values of Planck’s constant and the speed of light. ‘The Compton clock can provide an absolute measurement of the mass of a caesium atom to an accuracy of four parts in a billion,’ Müller says.

For Ian Robinson, of the UK’s national measurement institute at the National Physical Laboratory, the new clock provides a neat example of the wisdom of moves that are currently underway to redefine the kilogram in terms of a universally agreed value for Planck’s constant. ‘If we can agree on a value for Planck’s constant then this method becomes a very straightforward technique for measuring atomic mass in terms of frequency,’ says Robinson. ‘In this way it is an extremely nice illustration of why it is a good idea to fix Planck’s constant – something that people are working hard to achieve and with luck may happen within the next couple of years or so.’