Although little will change in practice, Iupac’s new definition of a mole has gained support from (almost) all sides 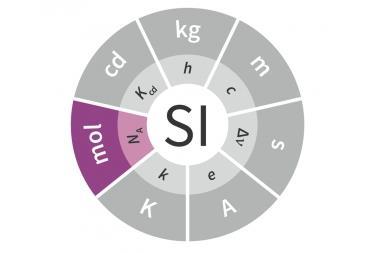 A number of the base SI units are currently being redefined

‘A mole contains as many elementary entities as there are atoms in 12g of carbon-12’ is what many chemists – and schoolchildren – would say when asked to define a mole. But this textbook definition is now set to be rewritten by the International Union of Pure and Applied Chemistry (Iupac).

Iupac’s new definition relies solely on a fixed value of the Avogadro constant and describes the mole as containing exactly 6.02214076x1023 elementary entities. The redefinition is part of efforts to modernise the international system of units (SI). The driving force for the change was to break the link between the kilogram artefact and the unit that it defines.

‘It became clear during the international survey we did that many people did not like the current definition of the mole,’ says Juris Meija from the National Research Council Canada and part of Iupac’s mole task group. ‘The previous definition has an indirect logic in that the mole is defined as having as many entities as there are in a specified mass of something else. The new definition simply cuts to the chase with its clear logic.’

In practice, however, the redefinition will have little impact. ‘Currently, there is absolutely no technological benefit that the new definition provides,’ says Meija. Although fixing the Avogadro constant could theoretically have impacts on high precision measurements, Meija explains that ‘we are currently at least four orders of magnitude away from being able to take advantage of [this]’.

‘If there are – currently – no scientific advantages, one could ask why bother?,’ says Meija. ‘But of course, we also have to acknowledge the pedagogical side, as well as potential future advances in measuring techniques.’

Those working in education welcome the change. ‘The new definition is well aligned with what students already use in practice,’ says chemistry education researcher Marcy Towns from Purdue University, US, also a member of Iupac’s task group. ‘It’s not going to have a big impact on what people do in the classroom,’ she says. ‘Although of course textbooks have to change.’

However, some critical voices question the new definition’s practicality. In a letter to Iupac, the French Committee for Chemistry wrote that by disconnecting the definition from a measurable mass, the mole’s definition is too far removed from what is done in practice. After all, substances are weighed to determine the amount of moles contained within, they argue.

Iupac’s new mole definition will be considered by the General Conference on Weights and Measures – the only body that can make changes to the SI – in November this year and, if accepted, will become the official one in May 2019.