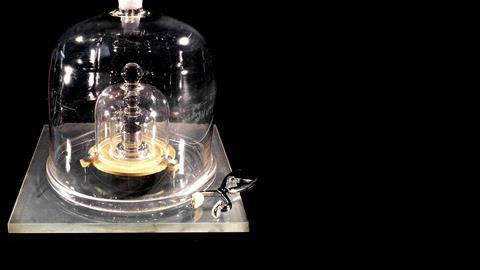 Game over for original kilogram as metric system overhaul looms

As clocks across France struck midnight on 1 July they heralded the end of the kilogram as we know it. Until that moment, scientists could submit measurements that will be used to redefine four of the seven base units: the kilogram, the ampere, the kelvin and the mole. Next year, this work will end the rule of the 128-year-old kilogram artefact and change the foundations of every mass measurement.

‘The real driving force came from the requirement to redefine the kilogram – it’s the only base unit that’s still defined by a unique artefact,’ says Richard Brown, from the National Physical Laboratory (NPL), the UK’s metrology institute, and member of several consultative committees serving the International Committee for Weights and Measures. The kilogram has troubled metrologists for decades, until, in 1999, they agreed to investigate ways to break the link between the unit’s definition and the artefact.

The decision was taken to use natural constants, believed to be stable over the lifetime of the universe, as the basis for the units – as is already the case with the metre, defined by the speed of light.

‘The redefinition is kind of like having work done on the foundation of your house: you spend a lot of money doing it but afterwards, everything looks exactly the same because everything that’s been done is underground,’ says Michael de Podesta, physicist and principal research scientist at the NPL. Which raises the question: why change the metric system?

The physical object representing the kilogram – the International Prototype of the Kilogram (IPK) also known more affectionately as le grand K – is a platinum–iridium cylinder manufactured in 1879 and chosen as the kilogram 10 years later. Only a few people have ever seen the big K; it sits under several nested bell jars in a triple-locked vault at the International Bureau of Weights and Measures (BIPM) in France next to six sister masses, all kept at constant temperature and humidity.

It’s hard for people to see the actual watt balance and understand its working principles, which is why we built a table-top version made out of Lego

But a unit solely defined by an artefact has its problems. If the object changes in any way, the unit changes with it. Once every four decades the big K is removed from storage to verify the mass of the 67 copies stored in metrology labs around the world. Although the IPK always weighs – by definition – 1kg, the copies’ masses seem to drift over time, making it likely that the big K itself has also changed. 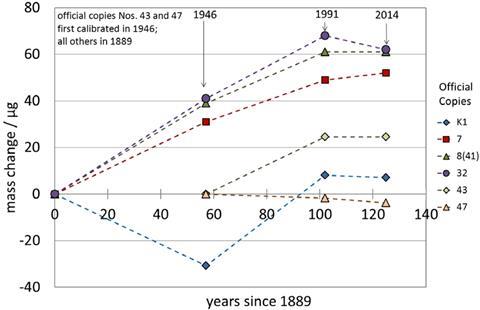 The mass of the copies of the big K have drifted away from the original since they were first made making it even more urgent to base the redefinition of the kilogram on an unchanging natural constant.

Researchers have shown that tiny amounts of air pollutants, mainly mercury and carbon compounds, deposit on platinum weights, minutely altering their masses over the years.1 ‘Right now the IPK has zero uncertainty. So even if it’s drifting, nobody knows, because it is the reference,’ says Darine Haddad at the National Institute of Standards and Technology (NIST) in the US. 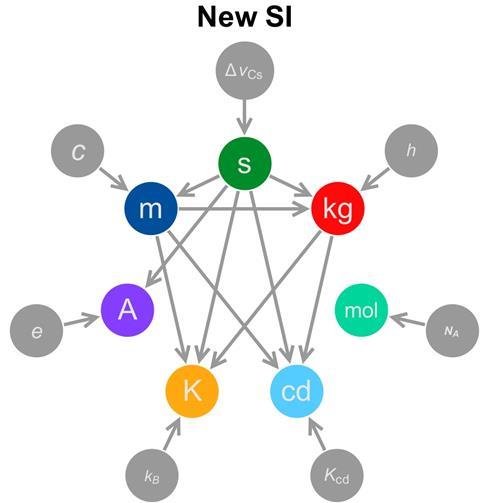 The relationship between the fundamental seven units in the new SI is based on natural constants. The frequency of the caesium transition (ΔvCs) is used for the second (s); the speed of light (c) for the metre (m); the Planck constant (h) for the kilogram (kg); the Avogadro constant (NA) for the mole (mol); the sensitivity of the human eye (Kcd) for the candela (cd); the Boltzmann constant (kB) for the kelvin (K); and the elementary electric charge (e) for the ampere (A)

The new definition aims to alleviate this problem by separating the unit’s definition from its realisation. ‘For the kilogram, the definition is currently the same as the way you realise it – as in, if you want to realise or make a kilogram you need to get the kilogram prototype and make a copy,’ explains de Podesta. ‘The downside of this is, that as technology evolves, you are locked in to using 100-year-old technology to realise the unit. What you would like is to have a definition that is – perhaps inevitably – rather abstract, of what you really mean by a unit.’

The units’ underlying physics relate them to certain natural constants, which, unlike objects, are not changing over time. The kilogram will be defined by the Planck constant, h, a quantum mechanical quantity of approximately 6.62x10−34m2 kg/s.

The challenge now is to measure this constant in relation to the existing kilogram definition as accurately as possible and agree upon a fixed numerical value. But metrologists have to choose carefully – using the wrong value would mean changing the units.

Metrologists have invented numerous high precision measurements to work out the Planck constant – but the most prominent ones in the run-up to the 30 June deadline were the Avogadro Project’s silicon sphere and the watt (or Kibble) balance. 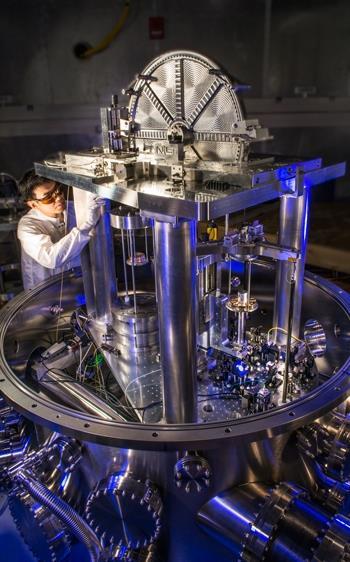 ‘A watt balance is essentially linking Newtonian physics to quantum physics,’ says Haddad, who is heading up NIST’s watt balance team. While a regular balance compares the gravitational force of a calibrated object and an unknown object, in a Kibble balance the calibrated object is replaced with an electromagnetic force generated using a coil and a permanent magnet.

To determine h, Haddad’s team calibrated their balance with the institute’s copies of the big K. ‘The balance is kind of like a black box: either you put a kilogram in and [the Planck constant] comes out or you put h in and the kilogram comes out,’ explains Stephan Schlamminger, who leads the fundamental electrical measurements group at NIST.

The watt balance might also be the only high-precision instrument people can build at home. ‘It’s hard for people to see the actual watt balance and understand its working principles,’ says Leon Chao, the team’s mechanical engineer, ‘which is why we built a table-top version made out of Lego .’ Though not as accurate as the real thing, the Lego version is fully operational – the team even published a parts list and instruction.

Though not something that can be easily replicated at home, the Avogadro Project’s silicon sphere is one of the visually more striking metrology experiments. ‘The sphere is approximately 93mm in diameter, and looks like a large ball bearing with a highly reflective surface,’ says Katie Green, team leader of precision optics group at Commonwealth Scientific and Industrial Research Organisation (CSIRO), describing the object resulting from a collaborative efforts of eight international metrology institutes.

If the sphere were the size of the Earth, the top of its highest mountain and the floor of its deepest valley would be separated by just 10m

The Avogadro Project’s 1kg silicon sphere is a strong competitor for the most perfectly round object in existence. If the sphere were the size of the Earth, the top of its highest mountain and the floor of its deepest valley would be separated by just 10m. ‘The purpose of the sphere is to create an object that can be used to define Avogadro’s number,’ explains Green. 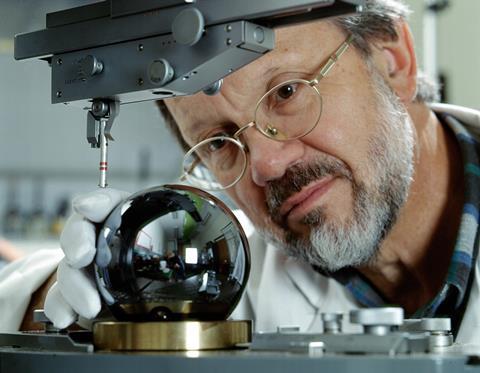 Achim Leistner at CSIRO in Australia with one of the silicon spheres – the most perfectly spherical objects ever created. The spheres are just 93mm in diameter

Unlike the tiny Planck constant, the Avogadro constant, NA, is huge, its value approximately 6.022×1023mol–1. It describes the number of particles – usually atoms or molecules – in one mole of a substance. Avogadro’s constant will play a central role in the mole’s new definition, replacing the current description of a mole as ‘containing as many elementary entities as there are atoms in 12g of carbon-12’.

To measure Avogadro’s constant, the Avogadro team needed to find a way to count the number of atoms in the sphere. Since counting several billion trillion atoms individually is impossible, the scientists calculated the number by determining the sphere’s mass and volume, the number of atoms per unit cell, the lattice spacing and the molar mass.

Theoretically, this could have been done this with any substance, but in practice the ordered arrangement of molecules in a single crystal works best for accurate atom counting. This is why the Avogadro sphere contains 99.995% of a single silicon isotope and is close to perfectly spherical.

The Avogadro Project’s measurement of the constant also provides a value for the Planck constant: h is linked to NA via the Rydberg constant. But rather than being competitors, the Avogadro sphere and the watt balance are complementing each other. ‘The fact that both measurements agree is a very strong statement,’ Schlamminger remarks.

In terms of what changes for the average person, the answer, according to Brown, is: not a whole lot. ‘People have wondered about the need for this change because it would have no impact on their own work,’ says Richard Davis, emeritus principal research physicist at BIPM. ‘You need to take a broader view. In the future, precision measurements will be easier to relate to the new updated SI.’

Now, scientists have a little more than a year to analyse the results. In November 2018, the Conference on Weights and Measures will meet again, hoping to finally make the new definitions official and return the metric system to what it its inventors in 1799 intended it to be: a system of measurements derived from nature.