Scientists have quantified the effect of climate change on soil salinity and crop production in Bangladesh. Their models suggest the monsoon will be unable to fully leach dry season salt deposits and that salt accumulation will become a major issue for farmers in coastal regions with farm productivity dropping by as much as 50%. 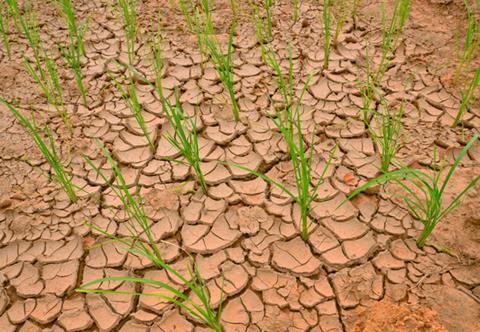 Salinity changes are a serious threat to agricultural in coastal Bangladesh

‘Maintaining or increasing food production in the face of climate change is an important future challenge for society, particularly in coastal areas subject to sea level rise,’ says land and water management researcher Ian Holman, from the Cranfield Water Science Institute in the UK, who was not involved in the research. 80% of Bangladesh is covered by low-lying floodplains making the country vulnerable to sea level rise and salt intrusion. Fertile soil and the climate within these costal zones allow for a wide array of crops to be cultivated, accounting for 30% of arable land within Bangladesh. Sustaining, if not growing, the agriculture sector is therefore paramount to the survival of the 35 million people that inhabit these regions as well as their national economy.

From November to May, during the dry season, soil salinity increases as water evaporates. Large areas of land cannot be used for crop production until the next monsoon season flushes out accumulated salts. But by the end of the 21st century the dry season is predicted to be 2–3 weeks longer. A larger volume of irrigation water, obtained from surface or groundwater will be used, increasing salt intrusion as sea level rises further taint groundwater aquifers. This diminishes the monsoon’s ability to remove accumulated salt.

The models for assessing these drought and salinity problems were developed by Derek Clarke from the University of Southampton, UK, with colleagues in the UK and Bangladesh as part of the ESPA Delta project, which investigates the impacts of environmental change in India and Bangladesh on people’s livelihoods. Historical data was used to predict soil water balances, dry season irrigation requirements and the effectiveness of the monsoon season rainfall at leaching accumulated salts.

The team discovered that irrigation with water containing 8 parts salt per thougsand resulted in incomplete salt leaching and an average crop loss of 50%. This level of damage is likely to make farming unsustainable and since salinisation is difficult to counteract, the ESPA Delta project is now researching salt tolerant crops.