Study concludes that more, smaller grants have a greater impact than fewer, bigger ones 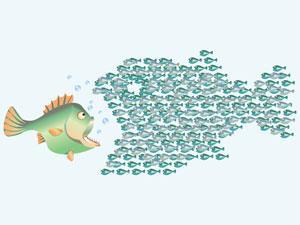 Together we are stronger

How should research grants be allocated? Are large grants to a few elite researchers more effective than small grants to many researchers? A new study has concluded that targeting diversity rather than ‘excellence’ may be more productive.

Biologists Jean-Michel Fortin and David Currie of the University of Ottawa, Canada, examined the scientific ‘impact’ of Canadian university researchers in three disciplines – animal biology, inorganic and organic chemistry, and evolution and ecology. They found that a researcher’s impact increased with the amount of funding they received, but greater productivity was not strongly related to greater funding. Impact was judged by looking at numbers of articles published, numbers of citations, the most cited article and the number of highly cited articles in a four year period.

Currie and Fortin say that concentrating research funds on ‘elite’ researchers in the name of ‘excellence’ does not increase the total impact of the scientific community. ‘Quite the opposite: impact per dollar remains constant or decreases with grant size,’ they write. ‘Highly cited studies are no more likely to result from large grants than from spreading the same funds among multiple researchers.’

The two come down firmly in favour of the ‘many–small’ model, rather than the ‘few–big’ one. Given the cost of grant review, they suggest it could be more economical simply to give a baseline grant to every qualified researcher. ‘Greater scientific diversity, like greater genetic diversity, increases the probability that some researcher (like some genetic mutant) will possess characteristics that will flourish in an unpredictable future.’

Impact varies greatly among researchers. Fortin and Currie speculate this could be down to differences in training, career stage, responsibilities such as teaching and administration or perhaps to ‘something ineffable, akin to talent’. Whatever drives impact, it largely persists over time in certain individuals.

Granting agencies may be discouraged to learn that the two could find no evidence that funders or their panels can pick or steer future productive scientists. Grantees whose funding increased in 2006–2009 relative to 2002–2005, did not show increased scientific impact, on average.

However, the researchers recognise that their study has some limitations. For example, it ignored aspects of scientific impact such as books, patents and training students.

Kieron Flanagan, a science policy specialist at Manchester Business School, UK, agrees that the definition of scientific impact is certainly a narrow one but says the findings are ‘plausible’. There’s little evidence about the best ways to fund science, he points out and, probably, there is no ideal. ‘The best metaphor for the research system is an ecosystem. In the end, what we should encourage is diversity in funding mechanisms in order to nurture the ecosystem. If every funder copied the trend to concentrate funding on the elite actors or institutions, so that it was impossible to break into the elite, then of course this would kill the vitality of the system.’