Scientific societies best academia on gender balance at the top

Women appear to be better represented in the leadership of scientific societies than in academia – and those societies might themselves provide valuable lessons and avenues to promote female leadership.

That’s the findings of a study of 202 zoology society boards across the world, which also found that these academic societies still have a long way to go to achieve gender equality. The researchers choose zoology as this was their area of expertise, but suggest the findings are broadly applicable to other societies and scientific fields because the most important factors explaining representation of women were independent of discipline.

The researchers found that women made up 32% of board members in these societies but filled just one in four executive roles. In comparison, in EU higher education women are a minority among senior academics, and made up just 20% of heads of academic institutions in 2014.

Lead author, Dominique Potvin, an animal ecologist at the University of the Sunshine Coast in Australia, says they looked at scientific societies because they may have the capacity to support early career researchers, and to provide valuable opportunities for networking. Moreover they ‘are self-selective: you might nominate yourself. So instead of top-down, it’s a bottom up approach – but it’s interesting that even then, it’s still far short of equal’. 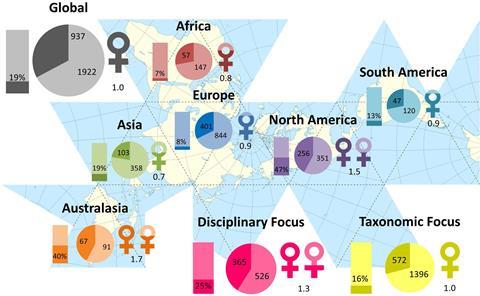 Pie charts show the number of men and women on the boards of scientific committees across different geographic regions. Darker colours denote women, lighter colours men. Bar graphs show the proportion of societies that have diversity statements (to the nearest percentage). Female symbols represent the average count for the number of women fulfilling leadership roles within a society (president, vice-president, secretary, treasurer) to the nearest decimal place. For example, in Asia: 19% of societies have diversity statements, 358 board positions are taken up by men and 103 by women, and the average number of women in senior board positions is 0.7 (out of four possible positions).

The study found that female board representation tended to be higher in societies with smaller boards, and with more women in leadership positions. Older and larger societies tended to be more dominated by men. It also suggests that the number of women in leadership positions increases with the number of women on the board and with the presence of an equality statement.

There were some geographical differences, with Australasia and North America having a greater proportion of board positions taken up by women. ‘This may be another factor that is associated with age: Australia and New Zealand’s institutions and scientific societies are relatively young, compared with Europe or North America, and we found the age of a society to be particularly influential,’ comments Potvin. But she acknowledges that much more qualitative analysis is needed to understand these trends. ‘What would a smaller board have to offer for women? Perhaps [it’s] less intimidating, with more changeover and therefore more opportunity for women to step up into those roles.’

Dorothy Ngila, now at the National Research Foundation in South Africa, conducted research on the representation of women in national academies. She agrees much more research is needed in the hope of learning what works to ‘push forward more concrete action’. She adds that there is ‘certainly a connection … if you have gender balance in governance, it perpetuates in the rest of the organisation.’