Scientists elected to Congress in US mid-terms

A record number of candidates with backgrounds in science, technology, engineering and mathematics (Stem) fields ran for US congressional seats in the 6 November mid-term election, and seven of them – the majority of whom are Democrats – won their races.

All but one of these incoming members of Congress are political newcomers. They include biochemist Sean Casten – a Democrat who beat Republican incumbent Peter Roskam for a seat representing Illinois. Casten, who holds an undergraduate degree in biochemistry and molecular biology as well as two master’s degrees in engineering management and biochemical engineering, had never run for office before. During his campaign he touted his support for nationwide carbon dioxide regulation, emphasising that his opponent has referred to global warming as ‘junk science’ and has voted to prevent the US Environmental Protection Agency (EPA) from regulating greenhouse gases and enforcing CO2 limits. 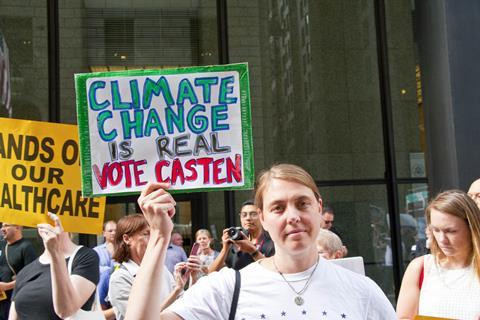 Other notable pickups in the House of Representatives include Joe Cunningham – an ocean engineer and environmental lawyer elected to represent South Carolina – as well as Kim Schrier, who is a medical doctor with an undergraduate degree in astrophysics. Elaine Luria – a retired US Navy nuclear engineer with an undergraduate degree in physics from the Naval Academy and a masters degree in engineering management – will be representing Virginia, and Chrissy Houlahan, who will become a new congresswoman from Pennsylvania, earned an engineering degree from Stanford University and then a masters in technology and policy from MIT.

Finally, Lauren Underwood, who was appointed by former President Obama as senior advisor to the US Department of Health and Human Services, defeated incumbent Republican Randy Hultgren for an Illinois congressional seat. Underwood is a registered nurse who has a dual master’s degree in public health and nursing, and she has worked as a research nurse at Johns Hopkins University in Maryland. The new Congress will convene in January 2019.

‘It does seem to be a significant increase in the number of science and engineering trained candidates,’ says Joanne Carney, who directs the American Association for the Advancement of Science’s government relations office. ‘For decades, scientists and engineers have served in different capacities in the government – as advisors and professional staff members in congressional committee offices and elsewhere – we have seen that build and grow over the years, and this is to some extent a natural extension.’

Observers like Ben Corb from the American Society for Biochemistry and Molecular Biology argue that President Trump’s immigration policies have had negative implications for foreign scientists and the US research enterprise, and suggest that may be a pivotal factor in prompting Stem-trained people to run for office. ‘American science is so internationally collaborative that that had an impact,’ Corb tells Chemistry World. In addition, he notes that the administration’s appointment of non-scientists to lead key science agencies like the EPA and sit on federal science advisory committees may have also played a role.

Anthony Pitagno, who directs government affairs at the American Chemical Society, says that the Trump administration’s positions on climate change and EPA regulation encouraged more scientifically-trained people to run for public office in the mid-terms. He further states that these candidates may have been motivated by the White House’s proposed budgets, which were never enacted due to congressional intervention but would have ‘severely cut funding for science’.

Another important change brought by the mid-terms is that the Democrats will control of the House of Representatives and its committees, while the Republicans will retain leadership of the Senate. This may have important implications for science.

The House Science, Space, and Technology Committee, for example, will no longer be chaired by Lamar Smith, who has frequently attacked the peer review system at the NSF and the EPA’s authority to regulate emissions from industry. Smith had announced last year that he would not run for re-election and now the committee, which has jurisdiction over non-defence federal scientific research and development, will likely be chaired by Democrat Eddie Bernice Johnson, who is seen as a big supporter of science.

The presumed new speaker of the House, Nancy Pelosi, has also shown herself to be a Stem advocate. She was heavily involved with crafting the science stimulus package enacted by President Obama in 2009. Pelosi helped push through Congress that legislation, which was inserted into the broader economic stimulus package and included an extra $10 billion for the National Institutes of Health (NIH), an additional $3 billion for the NSF, and a supplemental $1.6 billion for the Department of Energy’s Office of Science.

However, there are also concerns that the forthcoming divided Congress, in which political leadership will be split between the two chambers, could be bad news for science and the research community. ‘I am concerned that nothing will get done over the next two years because of gridlock, and what that will mean for research funding,’ says Corb. The budgets of science agencies like the NSF and NIH have done and well in recent years, but there is some fear that because of political infighting, this progress could now be slowed down or even reversed.