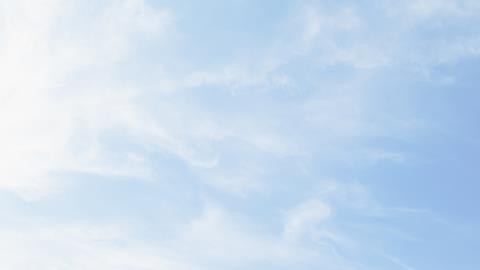 The effect of trace levels of solutes on ice nucleation and cloud formation has been significantly underestimated, new research shows.

Water’s freezing point may be 0°C, but it doesn’t always follow the rules. Consider how salt is used to deice road surfaces and pavements; water’s temperature does not change but the dissolved salt allows water to exist in a metastable liquid phase at temperatures below 0°C.1

Metastable water is fundamental to cloud formation – droplets form on tiny particles of mineral dust and some of these droplets, if sufficiently cold, heterogeneously freeze and form ice particles. Previous ice nucleation research has concentrated on homogenous freezing and pure water samples, with scientists attributing observed changes in water’s freezing behaviour to the amount of water available to interact with other materials – known as the water activity of the solution – rather than any dissolved matter such as salts.2

‘Many clouds in the atmosphere contain liquid water droplets even at temperatures below the usual freezing point of 0°C, and the presence of supercooled water has implications both practical and subtle. It’s why our flights are sometimes delayed while we sit on the tarmac waiting to have deicing fluid sprayed on the aircraft. It also is the source of one of the outstanding mysteries in atmospheric science: how exactly does supercooled water freeze?’ comments Raymond Shaw, a cloud physics expert at the Michigan Technological University in the US who was not involved in the study. ‘It’s more than an academic question because the formation of ice can completely change the precipitation efficiency, the optical properties and the dynamic structure of clouds.’ 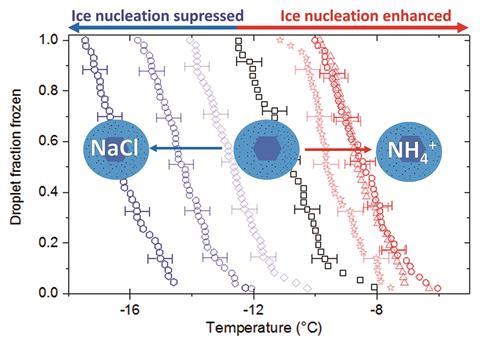 By studying a range of soluble minerals and inorganic compounds known to exist in the atmosphere, including the constituents of sea salt, in different combinations, Thomas Whale and colleagues at the University of Leeds, UK, have shown that concentrations of solutes low enough to not affect the water activity can profoundly influence ice nucleation. Just like salt on an icy road, they found that alkali metal halides (KCl, NaCl and NaI) suppress the freezing temperature of water droplets, causing them to freeze up to 8°C below that of pure water. Even more surprisingly, ammonium salts, such as (NH4)2SO4 and (NH4)Cl, can raise the freezing temperature, with water droplets freezing 3°C higher than pure water. On comparing ammonium salts to the most effective suppressor, potassium chloride, the team observed a difference of 10°C in freezing temperature.

‘The study is groundbreaking,’ says Yvonne Boose who studies cloud microphysics at the German Aerospace Center (DLR). ‘The results open up new ways of thinking about the nature of active sites and systematically studying the mechanism of ice nucleation.’

‘The fundamental processes that we’ve discovered will matter for controlling ice nucleation temperatures, but the magnitude of the impact is difficult to discuss at this point. It is something that certainly could have a significant impact and needs to be further investigated,’ comments Whale. ‘Some research groups have found hints for a solute effect other than what can be explainable by water activity,’ adds Boose, ‘but Whale and co investigated these effects systematically using a range of solutes on various nucleators. A challenge that remains is to study multicomponent systems in more detail to be able to understand what these effects mean for ice nucleation as it happens in the atmosphere.’