How the products of fire control the formation of snow

Nadine Borduas-Dedekind currently runs an atmospheric chemistry group at the Swiss Federal Institute of Technology, ETH Zurich. In January 2021 she starts as an assistant professor at the University of British Columbia in Canada 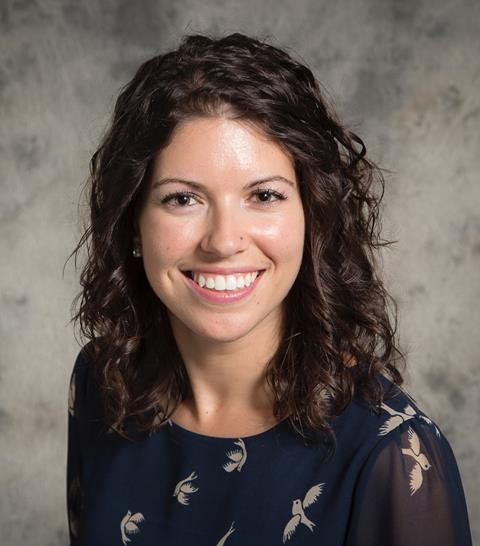 You might expect more interesting organic chemistry in the smoke above a barbecue than in the pristine snows of the Swiss Alps, but for organic atmospheric chemist Nadine Borduas-Dedekind, they’re intricately connected. The aerosols, dust and large molecules thrown in to the atmosphere by fires are exactly the kind of particles that drive water droplets to become ice crystals in clouds. And so her team has found itself stoking a barbecue on her lab’s roof to sample early precursors to those ice-nucleating particles as well as trekking through the alpine wilderness to recover the real thing at the end of its atmospheric journey.

Originally trained in core organic chemistry topics like total synthesis and bond activation, and with experience working at pharmaceutical companies as an undergraduate, Borduas-Dedekind took up a position at the drug company Merck Frosst in her native Canada after graduation. However, she soon departed for grad school to pursue a master’s degree and research of her own. The opportunity to then turn her organic chemistry expertise towards the atmosphere came as something of a surprise. Two atmospheric chemistry professors explained the lack of an organic chemistry perspective in their field, and invited her to do a PhD that bridged that gap.

The shift in focus was a challenge, but Borduas-Dedekind found herself in the useful position of bringing new knowledge to an existing field. ‘You go to the conferences, and they’re like, “Oh, she’s the one who works on mechanisms and can push arrows.”’ ‘For my advisors these atmospheric molecules were very big, they had two or three carbons and maybe one oxygen and a nitrogen. I was like, hey this is tiny.’ Her PhD was followed by a stint in environmental consultancy work in South Africa, but having explored a variety of scientific roles around the world, she concluded that academic research was where she needed to be. She resumed her investigations as a postdoc at ETH Zurich in 2016, continuing from 2018 as an independent researcher.

Ice nucleation is central to her current work. Droplets in clouds can super-cool to below water’s freezing point, waiting for the appropriate nudge to convert into the solid state. That nudge can come from organic aerosols or even large molecules, which act as ice-nucleating particles. The chemistries and sources of those particles are many and varied: forest fires, paradoxically, create a broth of particulates that can drive freezing in clouds. Because clouds and snow can adjust the Earth’s reflectivity, or albedo, understanding that journey from fire to ice is critical to modelling the planet’s energy balance. ‘We’re trying to bring an organic chemistry magnifying glass to some of these big picture climate problems,’ she says.

Borduas-Dedekind’s research involves both top-down and bottom-up approaches to ice-nucleating particles. At the top end, her team has travelled to the wilderness to retrieve freshly fallen snow, which has ice-nucleating particles frozen inside. Back in the lab, their homemade Freezing ice nuclei counter, or Finc, helps them to understand the concentration and composition of the particles in those samples. ‘The instrument uses a camera to look down into 288 wells filled with a solution containing an ice nucleating substance,’ she explains. ‘We cool the temperature from 0 to -35°C at a rate of 1°C per minute and we watch the wells freeze as a function of temperature. We then obtain a frozen fraction per temperature, which is characteristic of the material and its concentration in solution.’ Alternatively, the particles can be subjected to UV light to understand how they degrade and transform as they persist in the atmosphere. 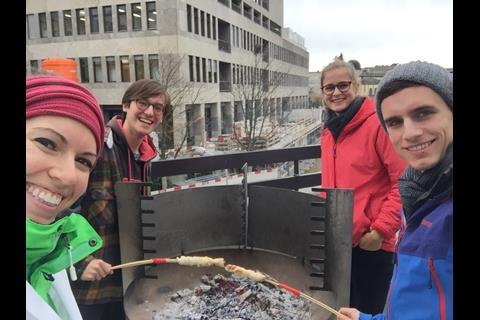 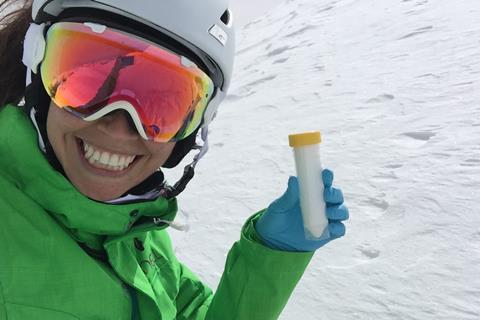 At the other end of the scale is bottom-up chemistry, where Borduas-Dedekind and her team try to synthesise compounds resembling the ice-nucleating particles, so they can explore their chemistry in more abstracted but controlled ways. ‘Hopefully, those two approaches meet and then you can make a connection: “Here’s what we understand about the chemistry and then the molecular structure of some of this organic matter in the atmosphere,”’ she says. Recently, they’ve discovered that lignin retains its ice-nucleating ability despite significant aging by UV light, suggesting a heterogeneity in the atmospheric impact of particles with different chemistries.

Borduas-Dedekind recognises the value of different approaches to solving problems, having worked around the world on internships and research projects. ‘I worked in a pharmaceutical company in Germany and I worked for one in Canada, and they’re very different in terms of their structure,’ she explains. ‘But they’re both as efficient, as effective, as successful.’ That experience, and being able to assess the pros and cons of the approaches she encountered, encouraged her to draw out the diversity of viewpoints in her team, whose backgrounds span physics, chemistry, engineering and mathematics. That might mean a greater range of views when discussing research, or fresh perspectives when writing manuscripts. ‘By having such a diversity of experience and expertise, I as the supervisor learn a ton, and I love these scientific exchanges. It’s also an opportunity to show humbleness and break down the perceived hierarchy of student and professor.’ 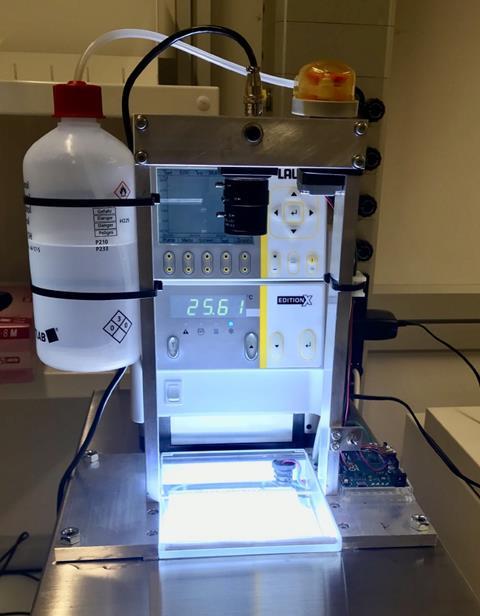 Respecting her students’ expertise and coaxing them to recognising it in themselves also improves her lab’s capabilities. Developing the Finc instrument meant delegating responsibility to her research assistants Anna Miller, a chemist, and Killian Brennan, an atmospheric scientist with expertise in machining. ‘Decisions about the quality of the camera and how to solder things, I don’t know how to do that, but that’s okay. Killian did,’ she explains. By encouraging her students to teach each other, the team maintains that expertise even as people come and go – a process she makes sure to participate in. ‘Actually learning everything that they do to the best of my ability is really important,’ she notes. ‘The Finc was built a year and a half ago. So some parts are starting to fail, and they need to be replaced. And so I try to be involved in that knowledge transfer.’

Borduas-Dedekind’s future research will be closer to home: she plans to advance a project on indoor chemistry when she takes up an assistant professorship at the University of British Columbia, Canda, in 2021. Although our living and workspaces are full of reactive organic species, they’re arenas for chemistry that are only just beginning to get the attention they need. ‘There’s room for an organic chemist to be looking at some of these reactive molecules,’ she notes. For example, nicotine is a highly reactive molecule and well known as a poison in the body, but its reactions and the end products after it mingles with the indoor atmosphere are still poorly understood. Ultimately, she expects her students’ insights will help drive her lab’s new work: ‘We’re curious people so it’s always changing. Let’s see who chooses to join my group and see where they take my group’s research directions.’