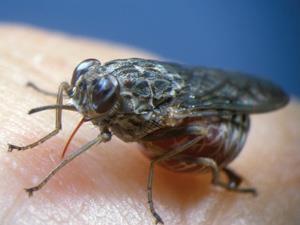 Tsetse flies feed on the blood of vertebrate animals

An international team of chemists has developed a green method for creating odour attractants to trap the insects that spread African sleeping sickness.

Sleeping sickness or African trypanosomiasis is transmitted by tsetse flies and is a threat to millions of people, and their livestock, across sub-Saharan Africa. Trapping these flies can reduce the number of sleeping sickness cases. Unfortunately, the odour attractants that draw the flies in are often prohibitively expensive – barring buffalo urine, which has unfortunate hygienic and olfactory detractions – limiting their use.

The two groups met at a sustainable chemistry conference where they found that Cole-Hamilton’s work on cashew nut shell extract, which is the primary source of cardanol – a good starting material for 3-propylphenol, and Gooßen’s work on isomerising olefin metathesis, were complimentary.

Each year, around 450,000 tonnes of cashew nut shell liquid is produced as a waste byproduct of the cashew nut industry. Cashew nut shell liquid primarily consists of a mix of compounds known as anacardic acids, which all have similar structures but a range of R groups that makes them hard to process and isolate. However, Gooßen explains that because the first double bond of the R group is isolated at the 8-position for all of the acids they have got around this problem with ‘a simple ethenolysis combined with a distillation under decarboxylation to convert this mixture into a single compound.’ Subsequent ethenolysis shortens the side chain in a consistent manner and allows the controlled synthesis of either 3-ethylphenol or 3-propylphenol. 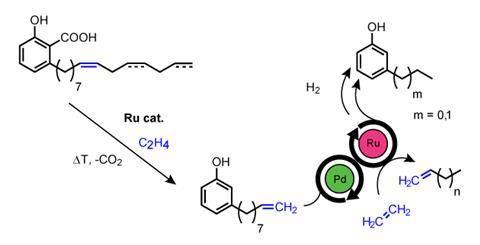 ‘The diversity of functionalities present in natural products and the availability of a variety of selective green reactions that can be put into action together in a tandem or sequential manner give a glimpse of a rich future for this sustainable chemistry,’ comments Christian Bruneau, an expert in catalytic organic synthesis at the University of Rennes 1 in France.

Gooßen highlights that the synthesis is based on natural products that are naturally abundant in the sub-Saharan countries where sleeping sickness is a problem and as a result, is not dependent on foreign, petrol-based chemicals.