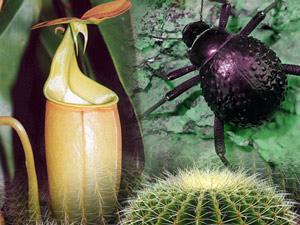 A beetle, a cactus and an insect-gobbling plant have provided the inspiration for the most efficient surface for condensing water vapour ever seen. The slippery surface, containing arrays of bumps of a precise geometry, can be fabricated inexpensively from almost any material, says the team. The new surface sheds water droplets 10 times faster than the best comparable surface. The finding could have important applications wherever condensation is needed, such as in desalination, air conditioning, water harvesting and thermal heat generation.

‘When thinking about this problem of water-collection efficiency, we looked at what nature might give us for inspiration,’ says Joanna Aizenberg, who led the  Harvard University research team.

Efficient harvesting of water vapour requires two main processes: quick condensation of vapour and rapid removal of the water from the surface. To improve condensation on a surface, the researchers took a leaf out of the water-harvesting namib desert beetle’s book. These insects have hemispherical bumps on the surface of their bodies, which promote condensation of water vapour through a phenomenon called focused vapour diffusion flux, which draws vapour to the apex of the bump to create a droplet. Aizenberg’s colleague Kyoo-Chul Park carried out complex geometric modelling to predict the most efficient dimensions of the convex bumps.

‘However, with a symmetrical bump the water will just run off in any direction,’ says Park. ‘We wanted to see if we could redesign its shape to transport the water droplet in a directed fashion.’

The team took inspiration from cactus spines, which are in effect long, thin cones. Water droplets forming on the tips are drawn down the spine by capillary action. So the team introduced a conical ‘tail’ to the bump. This provides a slope down which droplets can roll away from the apex. Park then carried out another series of calculations to show that the best geometry for the apex of the bump was a kind of rectangle with rounded corners. Here droplets form on the corners of the rectangle, grow and coalesce to create one big droplet. This then rolls down the slope, accelerating and picking up any smaller droplets on the way.

To fabricate a surface containing arrays of these bumps, which are of the order of millimetres in size, the team used 3D printing to create a negative mould. Thin aluminium sheet was then pressed onto the template, to create the bumps on the aluminium. Aizenberg stresses, however, that given their relatively large size almost any appropriate surface could be patterned with the bumps.

‘To make the droplets move even faster, we decided to make the bumps slippery,’ says Aizenberg. In nature, the pitcher plant coats its leaves with a film of water. This presents a low-friction surface to the oily feet of insects, which slide helplessly into the innards of the plant to meet their doom.

Turning this concept on its head, the Harvard team lubricated the bumpy aluminium with oil. They did this by functionalising the surface with long-chain phosphonates, upon which a film of oil can adhere. This gives a virtually friction-free slipperiness to the surface for water droplets.

When the researchers tested the final product they were stunned by the efficiency of the surface. ‘We did not expect the performance to be so good,’ admits Aizenberg. ‘Each of the elements on its own already provides a huge improvement on state-of-the-art materials, but when combined we got even better improvement.’

The team is now working on developing efficient condensing surfaces for specific applications, such as heat exchangers.

Other researchers in the field are impressed by the Harvard team’s results. ‘Improving drop-wise condensation through surface modification is currently a very active area because of the importance of condensation in heat transfer and water harvesting,’ says Steven Bell, head of the innovative molecular materials group at Queen’s University, Belfast in the UK. ‘This work is a clever extension of the Aizenberg group’s earlier liquid infused ‘slippery’ surfaces. Adding biomimetic surface structures that assist both droplet condensation and shedding has made a significant difference to the overall performance of the system.’

Tegwen Malik, biomimetic Fujitsu research scholar at Swansea University in the UK, says: ‘The researchers have successfully designed and fabricated surfaces that combine knowledge gained from plants and animals. This is a particularly important area of research considering the lack of fresh and safe water on the planet for an ever increasing global population.’