A device that uses a metal-organic framework (MOF) to capture water directly from air has been developed by US researchers. The system can capture and release several litres per day using only sunlight, with no additional energy required. 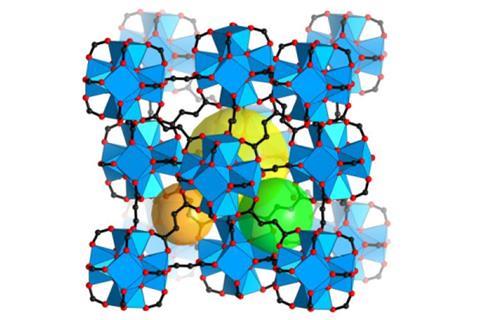 Water vapour fills the air around us, yet two-thirds of Earth’s population face water shortages. Harvesting fresh water from air therefore offers obvious benefits. Current techniques often involve cooling the air to reduce its capacity to hold water vapour; but arid regions of the Earth usually have low humidity, so air would have to be cooled drastically. This consumes a large amount of energy – something regions short of water often lack. Porous materials such as zeolites and silica gels can adsorb water molecules from less humid air, but these materials usually have limited capacities or require high temperatures to release it. ‘You need a material that selectively brings water in but does not hang on to it too tightly,’ says chemist Omar Yaghi of the University of California, Berkeley.

In 2014, Yaghi and colleagues published a systematic study of metal-organic frameworks’ (MOFs) and related materials’ potential for water capture. One – Zr6O4(OH)4(fumarate)6, or MOF-801 – could capture water from air with as little as 20% humidity, which is similar to arid regions like North Africa, and release it relatively easily. ’While we generated much attention in the MOF field, the obvious question everyone asked was: “Does this really work in the real world?”’ says Yaghi. 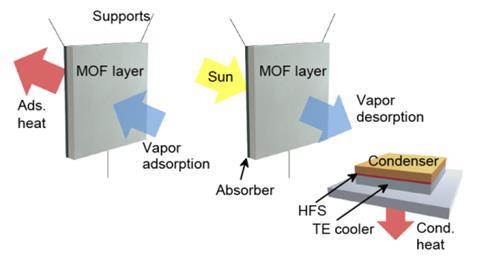 Using the device to harvest water produces up to 2.8 litres of water per kilogram of MOF every day

Yaghi’s group teamed up with engineer Evelyn Wang and colleagues at Massachusetts Institute of Technology to produce a working device that, when left in the dark at 25°C and 20% relative humidity, can adsorb over 250ml water from the air per kilogram of MOF. The researchers coated the MOF substrate layer with graphite, allowing it to absorb almost all incident sunlight. Therefore, light intensity less than 1 sun heats the MOF to around 65°C, expelling almost all the water it collects. The hot, vapour-saturated air diffuses into a condenser at ambient temperature, from which the liquid water can be collected. Harvesting water cyclically over a 24-hour period can produce up to 2.8 litres of water per kilogram of MOF. Although the researchers used a thermoelectric cooler to visualise droplets, ‘in a practical scenario, the condenser temperature can be maintained near the surrounding ambient with a passive heat sink’, Wang explains, meaning no power supply would be required whatsoever. ’My vision for the future is that we would have off-grid personalised water,’ says Yaghi.

Chemical engineer Krista Walton of Georgia Institute of Technology in the US is impressed by the researchers’ use of MOFs to ‘beat that trade-off’ between ease of capturing and subsequently releasing water. ‘Most of the units out there only work at 30% relative humidity and higher,’ she says. ‘Just as a demonstration, they’re showing that they can do it at 20%. The MOFs haven’t been particularly tuned, so based on that it makes me think they could generate water at even lower levels of humidity.’