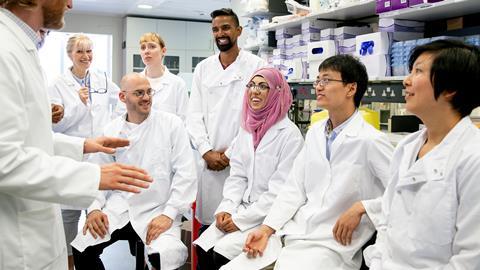 Large research teams are a growing trend and widely thought to increase productivity, citations and grant activity. However, new analysis has shown that small groups are just as essential for a flourishing science and technology sector.

The team led by James Evans from the University of Chicago analysed more than 65 million papers, patents and software products from 1954–2014. When they compared two major policy incentives for science – funding versus awards – they found that Nobel prize-winning articles were more likely to come from small teams, whereas those acknowledging US National Science Foundation (NSF) funding were associated with large teams. The team concluded that new disruptive ideas tended to come from smaller teams that explore promising ideas from older and less popular work. Large teams were more likely to develop recent ideas by solving acknowledged problems and refining common designs.

This difference appears to emerge as a consequence of team size. Certain types of research require the resources of large teams, but large teams need funding streams and success to ‘pay the bills’, the team writes. They are more sensitive to the risk of failure. Small groups have more to gain and less to lose so they are more likely to undertake untested opportunities.

‘What we see is that every additional team member is associated with a substantial and significant decrease in the likelihood of innovation,’ says Evans. ‘That was surprising. Moreover, it was surprising that different search patterns [funding versus awards] would be associated with these differences, and that funding alone would not solve it – only low-risk science that “looks” like big team science gets supported. In short, the effect, its size, its consistency and what will not fix it – funding conservative small team science – were all surprising to me and will be to many.’

To cultivate sustainable innovation, Evans continues, funders need to support more high risk work. ‘The NSF and National Institutes of Health will need to look more like venture capitalists, comfortable with a higher rate of failure if they are interested in sourcing disruptive innovations. But if we are going to continue to source disruptive advances, we will need to fund the high risk, small team research that tends to generate them, or we will kill it off.’

Russell Funk, assistant professor of strategic management and entrepreneurship at the University of Minnesota, US, says: ‘What is novel and important about this study is its demonstration that different kinds of collaborations yield systematically different kinds of research outputs. Yet both types of ideas – disruptive/destabilising on the one hand and amplifying/consolidating on the other – are important for scientific progress. While it’s hard to imagine that solo and small team investigators would ever completely disappear, I think the findings suggest that we need to take a much more critical look at the trends towards more and bigger teams in knowledge production. This trend has generally been seen in a positive light, and there are, no doubt, many benefits of collaboration, but it’s also necessary to ask what might be lost as a result.’