'Smart glass' can tune out light and heat

Researchers have produced glass that can be tuned to block visible light, infrared radiation or both simply by adjusting the voltage across it. Transmitting visible light while absorbing infrared allows a building to remain bright and well-lit, while blocking a significant proportion of the heat. Windows using this glass could lower the energy consumption of a building by cutting the need for air-conditioning on hot days.

Glasses produced from transition metal oxides like niobium oxide and tungsten oxide display electrochromism, which means that, as the electrical potential of the glass is changed, the glass lightens or darkens. Adding a thin layer of such glass to a standard silica glass window, together with a layer of electrolyte and a counter electrode, turns the window into an electrochemical cell. The potential of the glass, and therefore its tint, can then be controlled simply by applying an electric current.

‘Smart’ windows based on this principle have been built for display purposes and commercially available versions have been installed in executive conference rooms and corporate lobbies. But the electrochromism of such devices is largely confined to the visible region of the spectrum.

Delia Milliron’s group at Lawrence Berkeley National Laboratory in California and colleagues from the Institute for the Science of Materials in Spain synthesised a composite comprising indium tin oxide (ITO) nanocrystals embedded in an amorphous niobium oxide glass matrix. To achieve this, they combined ITO nanocrystals with niobium-containing ions called polyoxometalate (POM) clusters in solution and evaporated the solvent to leave a film. The POM clusters formed a covalently-bonded shell around the ITO nanocrystals, which transformed into a glass matrix when heated to 400°C. This reaction procedure is far simpler to control than traditional methods of producing nanocrystal–glass composites based on thermally-induced phase separation. 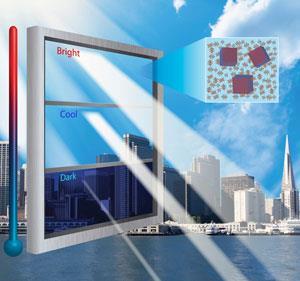 Both ITO nanocrystals and niobium oxide glass are electrochromic, but at different electrical potentials and – crucially – in different parts of the electromagnetic spectrum. When the glass has no potential applied to it, it transmits both infrared and visible radiation. Applying a small negative voltage to the glass reduces the ITO nanocrystals, and in this reduced state they absorb infrared. As the potential on the glass is made more negative, the niobium oxide matrix itself develops locally reduced states that absorb visible photons.

Milliron acknowledges that the work is ‘an initial demonstration of the concept’. Currently, the electrochromic glass has a liquid electrolyte and a metallic lithium counter electrode, neither of which would be practicable in a window. ‘Integrating our active glass with a solid electrolyte and a transparent counter electrode, suitable for a real window prototype, is the subject of our current research,’ she says. They are also exploring alternative nanocrystals to ITO in an effort to improve the infrared filtration and bring down the cost. Milliron hopes it could eventually add as little as 10–15% to the cost of the window.

Claes-Göran Granqvist an expert on smart windows at Uppsala University in Sweden is impressed. ‘The fact that one can use these nanoparticles of indium oxide for blocking the infrared is a new idea that Delia has developed,’ he says. ‘In this paper, the group take it one stage further and use also the electrochromism of the embedding material.’ He cautions, however, that 50% of solar energy lies in the visible spectrum, and you could never block this heat without darkening the window.