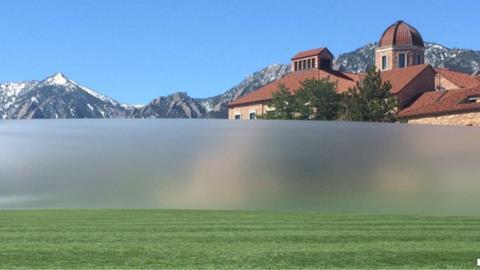 Film printed by the metre can cool homes without any power

A surface that achieves the seemingly impossible task of cooling buildings down in hot sunlight without any extra power has been produced by US researchers. A similar surface was produced by another group in 2014, but the new design is more effective and easier to produce industrially for economic air conditioning.

The sun, at a temperature of over 5500ºC, radiates much more power than a warm body on Earth, so it appears physically impossible for a warm body left in the sunshine to emit more radiation than it absorbs and thereby cool down. However, the higher temperature of the sun means it not only radiates more intense radiation than the warm body, but it also radiates shorter wavelengths. In principle, therefore, making a surface reflective at peak solar wavelengths of 0.3–2.5μm and emissive at the mid-infrared wavelengths of 8–13μm mainly emitted by a room temperature body should allow a surface to cool down in bright sunlight. By coincidence, the latter wavelengths coincide with an atmospheric ‘transparency window’, allowing the radiation to escape into space. In 2014 Shanhui Fan and colleagues at Stanford University in California produced a surface that emitted around 40W/m2 when placed in bright sunlight.2 The problem is that it requires seven alternate layers of silicon dioxide and hafnium dioxide, each fabricated with nanometre precision by electron beam evaporation, making the process difficult to scale up cheaply.

In the new research, mechanical engineer Ronggui Yang and colleagues at the University of Colorado in Boulder and elsewhere have devised a simpler surface comprising just two layers: a 200nm layer of silver covered with micrometre-scale spheres of silicon dioxide glass randomly dispersed in the highly-transparent polymer polymethylpentene (TPX). Solar radiation passes straight through the polymer and reflects off the silver with very little absorption. However, a broad collective resonance among the silicon dioxide microspheres makes the glass–polymer hybrid highly emissive across the entire mid-infrared transparency window, allowing heat – which can easily conduct into the polymer through the thin layer of silver – to radiate easily into space. Tested under direct midday sunlight, the surface produced an average cooling power of 93W/m2 .Yang suspects some improvement over Fan’s figures may arise from different measurement techniques, however.

The new material’s randomly distributed silicon dioxide glass spheres embedded in a plastic help it to emit infrared radiation to create a cooling effect. The silver surface the beads are placed on reflect much of the sun’s energy

The researchers have developed a roll-to-roll manufacturing process that allows them to produce the hybrid film at a rate of five metres a minute and have produced ‘hundreds of square metres’ of the material. ‘This roll is made similarly to any food wrapper,’ says Yang. The researchers are now studying the practical considerations of using the material for applications: the pure polymer TPX is guaranteed by the manufacturer for 20 years’ outdoor use, but the durability of the hybrid material needs to be tested. In addition, radiative cooling is known to work less well under cloud and, as Yang says: ‘You can’t just put this material directly on the roof because you don’t want to cool your house on a cold day in winter.’

Fan is impressed: ‘I think this is very interesting work demonstrating a pathway towards large-scale deployment of the concept of daytime radiative cooling,’ he says. He also suggests that ’being able to make large scale meta material films could be important for other areas.’